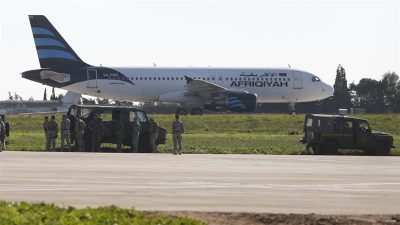 A Libyan aircraft with 118 people on board has landed in Malta after being hijacked, according to local media.

The Airbus A320 was flying from Sebha in southwest Libya to Tripoli for state-owned airline Afriqiyah Airways, the reports said.

The tiny Mediterranean island of Malta is about 500 km (300 miles) north of the Libyan coast.

The island’s prime minister said in a tweet on Friday that he has been alerted to the “potential hijack” of the plane.

Officials at Malta’s airport told Associated Press news agency that there appeared to be two hijackers on board.

The hijackers threatened to blow the plane up, news outlets including the Times of Malta reported.