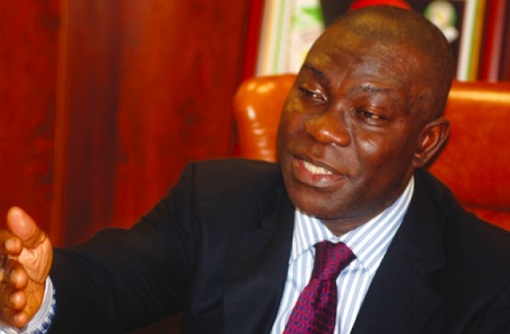 The Deputy President of the Senate, Sen. Ike Ekweremadu, has called for decentralized policing to get the country out of its numerous security and economic challenges.

He also stressed the need for respect for the rule of law and to ensure inclusive governance.

Ekweremadu made a call at the South East Economic and Security Summit held at the Government House in Enugu.

According to the statement released by his Special Adviser on Media, Uche Anichukwu in Abuja on Friday, Ekweremadu said “unless we restructure our security architecture, we will continue to have problems.

“The simple suggestion is that this is the time for us to think along the path of a decentralized policing.

“Today, we have challenges of kidnapping, insurgency, menace by suspected herdsmen and militancy.

“All these have never been resolved by about 340,000 police officers policing about 170 million people. It does not happen anywhere in the world”, he said.

Ekweremadu maintained that every part of Nigeria should be allowed to have the policing system that suits their needs if the nation was resolved to secure its borders.

He expressed concern about the country’s economic structure, saying, “there is no way you can run the type of economy we are running in a federal system and expect to make progress.

“The answer to it is restructuring so that every part of Nigeria will develop in accordance with its potentials, be it economic, intellectual, agricultural, or others to be able to contribute to the commonwealth.

“As long as we have a unified system of economy, it is not going to work. We must find a way of ensuring that we use our natural endowments for development”, he said.

The deputy president of the Senate also harped on the need for rule of law.

According to him, it remains a major factor for foreign investors and protection of the rights of citizens and corporate entities.

He said the Constitution was clear in Chapter 4 on fundamental rights.

“Liberty is something that God gave to us because it is an inalienable right and for you to take away somebody’s liberty, it must be in a very extreme circumstance, and in accordance with the law.

“So, if the court says someone should be released from detention, the government must do everything possible to respect that and everybody who is accused of an offence must as a matter of necessity, and in good time, have his day in court.

“This reminds me of the continued detention of Nnamdi Kanu. Whatever his offence, he must have his day in court and if the court says he be released, he should accordingly be released.’’

He said it was important that every part of Nigeria should be included in governance to cater for the interest of the different ethnic groups, languages and religions.

“Today, as I speak, there is no Igbo man in the commanding heights of our security sector and so they do not attend Security Council meetings.

“In the top echelon of the governance of this country, the Igbos are absent. I am not going to make any request because the President is not here and he is not represented, but I will just speak my mind on matters like these.

“These are things we need to think about because any part of Nigeria or the world that feels unjustly treated will never be interested in peace”, he said.

He said it was high time those at the helm of affairs gave a thought to how to address marginalization and non-inclusion of the Igbos in governance.