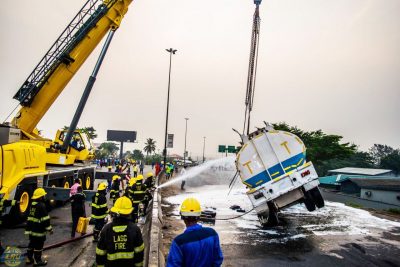 What could have been a major tragedy was on Saturday averted by the combined efforts of the Lagos State Emergency Management Agency (LASEMA) and the Lagos State Fire Service when a tanker fully loaded with 33,000 litres of PMS fell on the Anthony Bridge Inward Gbagada.

According to an eyewitness account, the incident which occurred at about midnight on Saturday was as a result of two trucks struggling to overtake each other which collided, leaving the fuel tanker fallen on its side while the other one sped away.

General Manager of LASEMA, Mr. Adesina Tiamiyu who confirmed the incident, said that at about 12:15am, a call came at the agency’s call centre to alert about the accident.

“We discovered that the fuel in the tanker was leaking heavily from the three compartments and men of the Lagos State Fire Service were on ground to blanket the fuel with chemicals and foam to reduce the level of combustible capacity to explode. We traced the path of the leaking fuel into the compound of Greensprings Schools in Anthony and thus also run through the underground gutters emptying this into the Obanikoro canal.

“The Fire Services pumped massive chemicals in its path to diffuse the powers of the fuel and LASEMA and other Emergency Response Team went into the neighbourhood to evacuate people and asking everybody to stop all forms of cooking and took them to safety,” he said.

The LASEMA GM said it took us over eight hours to bring the situation under control.

Tiamiyu said the State Governor, Mr. Akinwunmi Ambode at about 3am, came to the scene to see things for himself and gave instructions to LASEMA, who coordinated the rescue efforts to ensure the situation is handled diligently and carefully to ensure no fire incident is recorded.

He said LASEMA brought in its heavy duty equipment from the newly commissioned Lagos Response Unit (LRU) in Cappa Oshodi including the crane, “Charlie” and other support equipment to finally lift up the truck from its fallen position and it was towed to safety by another heavy duty tow truck known as “Super Metro”.

He said after the recovery of the truck off the scene, the Fire Service poured foam and chemicals on the road to wash off the fuel within the driving vicinity, flushed the gutters from inside the Greensprings Schools and at about 7.50am,the road, on both sides were open for free vehicular movement.

“We were able to achieve this feat because LASEMA has the equipment and the capacity including a team of other responders like the fire service, Rapid Response Squad, Lagos State Traffic Management Authority (LASTMA) and the Lagos State Ambulance Service (LASAMBUS) who all cooperated to ensure a hitch free operation,” he said.