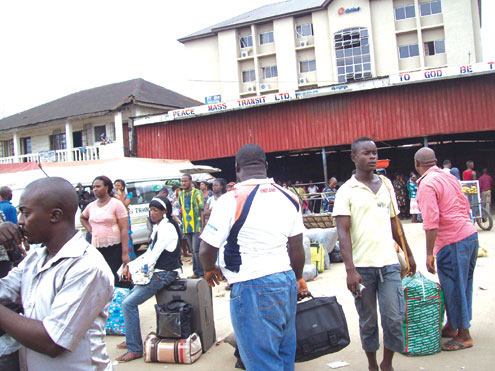 Passengers at a motor park

Nigerians have defied the impact of the country’s economic situation to travel for Christmas as many motor parks in the Federal Capital Territory (FCT) witnessed massive turnout of travelers on Saturday.

Many of the motor parks around Jabi and Utoko axis of the city recorded massive passengers turnout since Friday.

Ugwu disclosed that the PMT park recorded an upsurge of passengers on Friday which he described as the ”peak day’’ for travelers.

According to him, what PMT is experiencing this year is the same as last year.

“We had a surprise because we were not expecting passengers to turn out the way they did this year considering the cost of fare and the economic situation in the country today.

“Eventually we saw a good turnout of passengers irrespective of what is on ground economically,’’ he said.

Ugwu explained that even though the passengers were complaining about the hike in fare, they had equally shown understanding with the company considering the fact that prices of parts had gone up.

He added that the only option available to the company was to increase the fare because of the fact that the buses often return to Abuja without carrying passengers.

Other factors according to him, are the cost of spare part and prices of buses because the Toyota Hiace bus that normally sold for N9 million is now sold at more than N24 million.

“So, if you don’t bring up the fare, you may not be able to stay back in the business.

“What is important is that we have been able to make our vehicles road worthy, train our drivers to ensure safety on the road and carried out a comprehensive maintenance of our buses,’’ he said.

Hassan said that they loaded about 10 buses to Lagos and eight each to Ibadan and Akure on Friday.

He added that five buses had so far been loaded to Lagos, two to Ibadan and three to Akure on Saturday morning.

“We have made sure that all our vehicle are in order because we check the tyres, the engine and even the body very well to avoid problems on the road.

“We also check our drivers to be sure that they have not taken alcohol before driving and other safety measures and if we discover that a driver is drunk we discharge his passengers.”

Hassan said the earlier traffic congestion on Lokoja-Abuja road had been controlled by FRSC and security agencies.

Hassan Omika, a Driver at Jabi Motor Park, said the rush has drastically reduced compared to Friday when many people travelled.

Omika said there was an increment of about N1,000 to the fare because most vehicles that took passengers from Abuja usually return empty.

He explained that they were charging N2,500 to Anyigba and Ankpa before now but are currently collecting N3,500.

There were not many passengers but a staff of the company who refused to disclose his name said that Friday was the peak of their operation.

He said that the current recession had also affected their patronage, adding that most of their luxurious buses travelled last night.

Also, a passenger, Mr Thomas Amana, said that he was traveling to Kogi state to celebrate Christmas with his family.

He said that the period affords him the opportunity to spend quality time with his family, adding that he was adequately prepared for any hike in the transport fare.