Russian military plane disappears from radar with dozens on board 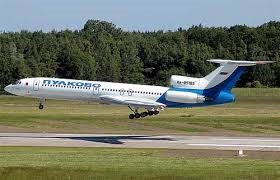 The type of plane that disappeared

A Russian Defence Ministry flight carrying dozens of people has vanished from the radar screens after departing from the resort city of Sochi, Russian media reported on Sunday, citing preliminary findings.

A total of 91 people were on board the Tu-154 aircraft, including musicians and media representatives, the Sputnik news agency quoted a security service source as saying.

Meanwhile, some media outlets cited sources as saying that the plane might have crashed in mountains in Krasnodar Krai.

Based on preliminary information, the accident was caused by technical malfunction or pilot error, a law enforcement source was quoted as saying.

The vanished airplane is not a civilian one and was en route to the Syrian port city of Latakia, according to Russian aviation and emergency ministry authorities.

The Tu-154 is a three-engine medium-range airliner produced by Russian aerospace and defence company Tupolev.

It is one of the fastest civilian aircraft in use and widely used in extreme Arctic conditions.