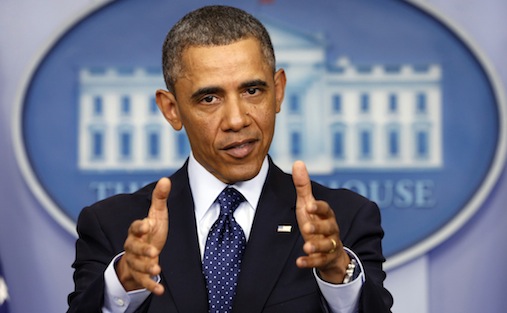 Outgoing U.S. President Barack Obama said he could have defeated Republican Donald Trump in the November 8 presidential election if he had run against him.

Obama told his former senior adviser David Axelrod in an interview for the “The Axe Files” podcast, produced by the University of Chicago Institute of Politics and CNN, aired on Monday.

He argued that Americans still subscribed to his vision of progressive change, asserting that he could have succeeded in this year’s election if he was eligible to run.

“I am confident in this vision because I’m confident that if I had run again and articulated it, I think I could’ve mobilised a majority of the American people to rally behind it.

“I know that in conversations that I’ve had with people around the country, even some people who disagreed with me, they would say the vision, the direction that you point towards is the right one.”

The two-term president also said that there was a difference between the hope-and-change vision he heralded in 2008, which won him outstanding victory over Republican John McCain.

“In the wake of the election and Trump winning, a lot of people have suggested that somehow, it really was a fantasy.

“What I would argue is, is that the culture actually did shift, that the majority does buy into the notion of a one America that is tolerant and diverse and open and full of energy and dynamism.”

In the 50-minute session, Obama repeated his suggestion that Democrats had ignored entire segments of the voting population, leading to Trump’s win.

He implied that Clinton’s campaign had not made a vocal enough argument directed toward Americans who had not felt the benefits of the economic recovery.

“If you think you’re winning, then you have a tendency, just like in sports, maybe to play it safer”.

He, however, said he believed Clinton “performed wonderfully under really tough circumstances” and was mistreated by the media.

The podcast interview was Obama’s latest post-election analysis, which had focused on Democrats’ failure to convince non-urban voters and a media preoccupied with negative stories about Clinton.

Obama said his party this year had not made an emotional connection to voters in hard-hit communities, relying instead on policy points he said did not make enough of an impact.

“And not thinking that somehow, just a great set of progressive policies that we present to the New York Times editorial board will win the day,” he said.

“Mitch McConnell’s insight, just from a pure tactical perspective, was pretty smart and well executed, the degree of discipline that he was able to impose on his caucus was impressive.

“His insight was that we just have to say no to that,” Obama said.

He said part of his post-presidential strategy would be developing young Democratic leaders, including organisers, journalists and politicians, who could galvanise voters behind a progressive agenda.

The outgoing president also said that he would not hesitate to weigh in on important political debates after he leaves office.

Following a period of introspection after he departs the White House, Obama said he would feel a responsibility as a citizen to voice his opinions on major issues gripping the country during Trump’s administration.

He, however, said that he would not necessarily weigh in on day-to-day activities.

“At a certain point, you make room for new voices and fresh legs.

“That doesn’t mean that if a year from now, or a year-and-a-half from now, or two years from now, there is an issue of such moment.

“Such import, that isn’t just a debate about a particular tax bill or, you know, a particular policy, but goes to some foundational issues about our democracy that I might not weigh in.

“You know, I’m still a citizen and that carries with it duties and obligations,” the outgoing president said.

Obama’s first acts out of office, however, will be lower-profile, according to him.

He said he would focus on writing a book and self-analysing his time in office.

The two-term president and his family plan to live in Washington while his younger daughter finishes high school, he disclosed.

“I have to be quiet for a while. And I don’t mean politically, I mean internally. I have to still myself.

“You have to get back in tune with your centre and process what’s happened before you make a bunch of good decisions,” he said.

As he concludes his term, Obama is growing sentimental about his time at the White House, according to him.

He said he grew misty in a meeting of senior aides recently thinking about the end of the Obama era.

“I got through about four minutes of the thing and then started, you know, getting the hanky out.

“It feels like the band is breaking up a little bit,” the outgoing 44th U.S. president said.

NAN recalls that Obama was inaugurated as the 44th U.S. President on Jan. 20, 2008, the only Black man in the history of U.S. to be elected president.

NAN also reports that the former Illinois senator, who still receives high popularity ratings among Americans, won re-election for the second and last term in 2012, will be out of office on Jan. 20, 2017.