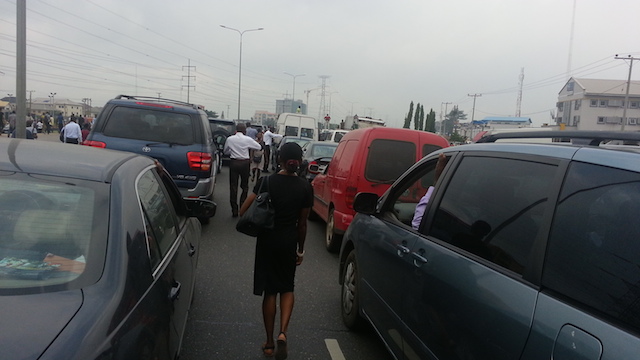 The Lagos State Government on Tuesday completed the removal of the Jakande and Chisco roundabouts in Ikate Elegushi axis of the state as part of effort to reduce travel time on the Lekki – Epe expressway.

Mr Anofi Elegushi, Acting Commissioner for transportation who briefed the newsmen after the opening of the modified Jakande junction, said Governor Akinwunmi Ambode’s administration was determined more than ever to make this Yuletide period stress free as far as traffic was concerned.

Elegushi said the third, fourth and eighth roundabouts would also be reconstructed to ease traffic congestion in the area and would be fully completed by January.

”This administration is determined to reduce the stress experienced by motorists and residents on this road.

”The roundabouts were replaced with traffic lights, expansion of the roads and provision of dedicated turning lanes as well as additional lay-bys.

”This will surely decongest traffic in this area, even for commercial vehicles, the travel time will reduce and they will have enough turnaround by earning more, ” he said.

Also speaking, the contractor for the project, Mr Biodun Otunola said apart from taking away the roundabouts to reduce travel time, pedestrians were also a major factor.

”Movement has been made easy for both motorists and the pedestrians, ” he said.

The Lagos State Government on August 17 announced that three roundabouts along the Lekki-Epe Expressway would be removed.