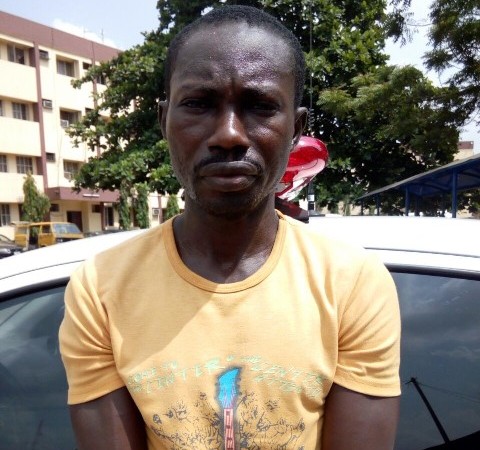 The Decoy Team of the squad got a hint about a kidnap attempt on a little boy by one of the two persons whom the prime suspect had contracted to perpetrate the crime.

Upon gathering further intelligence, a member of the RRS Decoy Team posed as a lady that the kidnapper sought to help give the child a good care.

RRS Source disclosed that for more than two weeks while the kidnapping took shape, the investigator, pretending as an accomplice, was exchanging information with the prime suspect.

It was revealed that the suspect assured the accomplice that he had gotten motorcycle to use in kidnapping the boy, stressing that the ransom was N10 million, which the father of the boy would be able to afford as a landlord and dealer in electrical appliances.

It was learnt that when the Commissioner of Police, Mr. Fatai Owoseni was informed of the jurisdictional challenge of arresting the kidnapped suspect in Ogun State, he ordered the Decoy team to proceed, assuring them he would contact his colleague in Ogun, adding that there was no jurisdiction in crime.

A source in RRS disclosed that one of the kidnapping suspects was shocked by the insistence of the prime suspect to kidnap the little boy and request for N10 Million ransom.

He continued: “I knew it was going to boomerang if I conceal the information and not inform the police. Then, I called one of my friends who resides in Lagos and explained the whole idea of the kidnap attempt on an innocent boy by someone in my neighbourhood, and the person also solicited that I join him to commit the crime.

“It was this my friend who told me to come to Lagos to inform the RRS. I eventually came the following day to report the case at its headquarters in Lagos”, the informant was quoted as saying.

The source added that the suspect had successfully kidnapped two persons in Kogi crime in Kogi State where he collected huge ransoms from their families.

Upon his arrival at the RRS’ Headquarters in Lagos, the suspect who confessed to the crime, said that he wanted to kidnap the young boy because his biological mother was seriously ill and looking for money by all means to pay her hospital bill.

In his confessional statement, he revealed, “I have been on the trail of that young boy and her parents for quite a while now. I conceived the idea to kidnap him when I was left with no option than to commit the crime because my mother is very ill at the moment.

“I wanted to demand for N10 Million ransom but if his parents cannot afford the whole at least I was expecting N3 Million at the end of the day. Although, I just relocated to that area and I am not that familiar with the nooks and crannies of that area very well. Then, I thought of contracting someone who knew the environment very well and would make the job easy for me.”

On how he would have carried out the kidnap, the Kogi State born suspect explained: “I had been watching the movement of his parents for about two weeks. I discovered that whenever he was taking the boy to school every day, when the man drives out, he would alight from the car to lock the gate because they don’t have a gate keeper in their house. Also he takes him to school between 7:00 a.m and 8:00 a.m.

“What I devised was to kidnap the boy whenever the driver alight from the car to close the gate, escape on a waiting bike. Although, I live in a room and parlour apartment, I had planned to keep him with me in my house to be demanding and threatening his parent to bring my expected ransom,” he said.

The father of the child, Udwu, who had no inkling of the looming woe, thanked the Policemen for carrying out the intelligence report successfully which led to the arrest of the kidnap suspect.

Reacting to the incidence, the Police Public Relations Officer of Lagos State, Superintendent of Police, Dolapo Badmus, said that the suspect would be charged to court upon completion of the Police investigation.

The suspect has been transferred to the State Criminal Investigation Department (SCID), Panti, for further investigation.