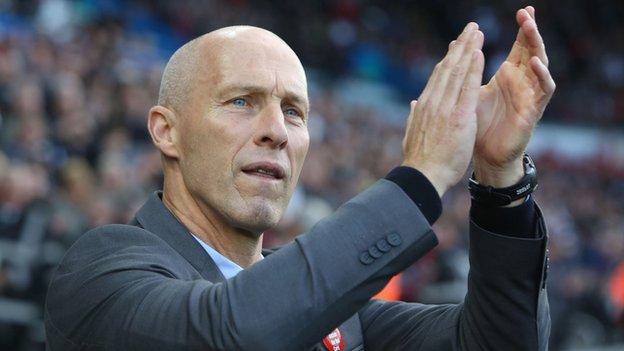 Swansea City have sacked Bob Bradley after only 85 days in charge of the Premier League club.

Monday’s 4-1 home defeat by West Ham was Swans’ seventh defeat in 11 games since Bradley took over on 3 October and leaves them on 12 points, above bottom club Hull on goal difference.

Bradley was the first American to manage a Premier League club.

Chairman Huw Jenkins said: “We felt we had to make the change with half the Premier League season remaining.”

He added: “With the club going through such a tough time, we have to try and find the answers to get ourselves out of trouble.

“Personally, I have nothing but praise for Bob. He is a good man; a good person who gave everything to the job. His work-rate is phenomenal and we wish him well for the future.”

Bradley managed USA, Egypt and Stabaek in Norway before leaving French second division club Le Havre to succeed Francesco Guidolin, who had himself only been appointed in January.

At the time of Bradley’s arrival, Swansea were above the relegation zone only on goal difference but City have picked up just eight points out of a possible 33 under Bradley’s leadership, conceding 29 goals in the process.

“I knew exactly what I was getting into when I came to Swansea and realised the hardest part was always going to be getting points in the short run,” said Bradley.

“But I believe in myself and I believe in going for it. That’s what I’ve always told my players. Football can be cruel and to have a chance, you have to be strong.

“I wish Swansea the best and look forward to my next challenge.”

Swansea City were rightly hailed as a ”model” club during their rise and stabilising in the Premier League. Today they have descended into the shambolic. The American owners have starkly admitted they made a huge mistake with the appointment of Bob Bradley, their first key decision since taking over.

Judging by the poisonous atmosphere during the defeat by West Ham, it is difficult to imagine the stock of the hierarchy and some who continue in authority from the old board, getting much lower.

On its own the decision to sack Bradley seemed inevitable. He appeared a good man who looked out of his depth, especially when it came to in-game management. But he did inherit a dismal squad, the legacy of some poor work in the transfer window over the last few years.

Now, with the January transfer window imminent, the Swans are looking for a replacement. Sacking the manager is the easy bit. The next appointment has to be right to stand a chance of continuing their Premier League journey.”