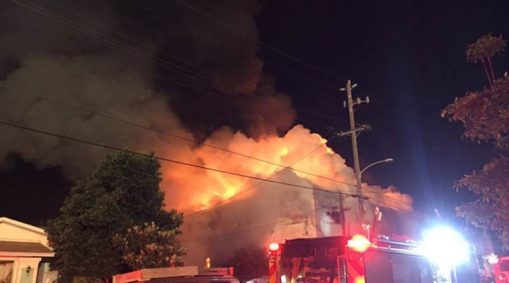 Three children of the same parent on Wednesday died 24 hours after they suffered severe burns from the fire incident that engulfed their apartment in Ikotun Egbe area of Lagos.

A News Agency of Nigeria (NAN) correspondent who visited the scene gathered that the children died in a hospital where they were taken for treatment on Tuesday.

A very reliable source of the family told NAN that one of the victims died shortly after they were brought to the hospital.

The source, who identified them as Chiamaka, Emmanuel and Chiagozie Ifediba, said they are below 10 years of age.

It said that the fire which started around 2 p.m. on Tuesday was caused by power outage inside their single room apartment at No.15 Ikuna Str. Liasu Road, Ikotun Egbe.

According to the source, their mother, Mrs. Ngozi Ifediba, was not at home when the fire started.

Mutiu Wasiu, a tenant in an adjacent building to the affected house also told NAN that the door to the room was locked when the fire was noticed.

He added that the room’s window was forced open before the victims were brought out.

Wasiu said that the children, who were found unconscious and covered in smoke, were rushed to a nearby hospital in the area.

“It was a terrible experience for me; I see no reason why someone will lock her children inside the house to buy something.

“It is only God that can save the children because the state we found them was not palatable,” he said.

Francis Simon, a resident of the area, said that the children would have been rescued on time, but that their neighbours who were more concerned about saving their property before the fire escalated.

Simon said that the fire was eventually put out before the arrival of fire service personnel.

“We managed to put the fire out with the help of outsiders and passerby,” he said.

Also a NAN correspondent who visited Do-alllars hospital where the children were taken for treatment, reports that relatives and sympathizes were seen discussing the accident.

Confirming the incident, Mr Razak Fadipe, Director, Lagos State Fire Service, said that the information they received on arrival at the scene was that the victims’ mother locked them in.

“She was said to be cooking and left them inside to purchase some items in a nearby shop when the incident occurred,” Fadipe told NAN.

He also said that the children were in critical condition when he visited the hospital on Tuesday.