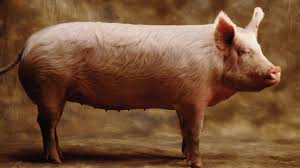 Mr Jerry Ossai, the Chairman, Pig Farmers Association, Delta chapter has called for the consumption of pork, saying it is more nutritious than red meat.

Ossai in interview with the News Agency of Nigeria (NAN) on Thursday in Asaba alleged that “pork is tastier than beef and even more nutritional than all red meat.’’

Ossai, who is also a former Chairman of All Farmers Association (AFAN) of the state, said that “pork is white meat’’, adding that from the nutritional point of view “white meat is better than red meat’’.

According to him, “pigs are the cleanest animals you can ever think about”.

He said that apart from the nutritional value of the pork, “if pigs are well fed, the fat content is always very small.’’

“If you give pigs good food as required, the fat content is always very low compared to some other meat,’’ he said.

Ossa however said that one of the major challenges facing pig farmers in the country was the inherited taboo against pig which had been associated with religion and culture that people have refused to break.

“Because of this inherited belief, many people still find it very difficult to eat pork,’’ he said.

On the current price of pork in the state, Ossai said that the price of pork recorded some marginal increase in the last one year.