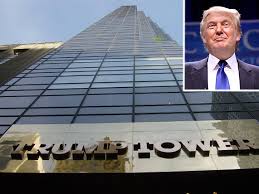 The lobby of Trump Tower in New York was briefly evacuated on Tuesday amid reports of a suspicious package found in the Manhattan skyscraper of U.S. President-elect Donald Trump, sources said.

The New York Police Department (NYPD) and the Fire Department of New York (FDNY) carried out the evacuation to forestall any eventualities.

However, the departments said that the tower was all clear following the earlier suspicious package in the lobby.

It said after investigating, the suspicious package contained children’s toys.

Assistant Commissioner for Communication and Public Information for the Police Department, Peter Donald tweeted that the tower was all clear following the earlier suspicious package in the lobby.

Donald had said earlier that “out of an abundance of caution” the NYPD Bomb Squad was responding.

“Out of an abundance of caution, NYPD Bomb Squad is responding to a suspicious package in the lobby of Trump Tower. Updates to follow
— J. Peter Donald (@JPeterDonald)December 27, 2016.”

The NYPD official said both the NYPD and FDNY were on location investigating.

The NYPD official said the bomb squad was made aware as part of routine procedure after a suspicious knapsack was found in the lobby of Trump Tower.

Donald said NYPD and FDNY officials were called to the scene in midtown.

According to him, evacuation was protocol for a suspicious package and does not necessarily indicate how serious the situation is.

Footage from outside the tower showed the stream of people leaving the building as they were being directed by police.

President-elect Donald Trump is currently in Florida at his Mar-a-Lago estate with members of his family.