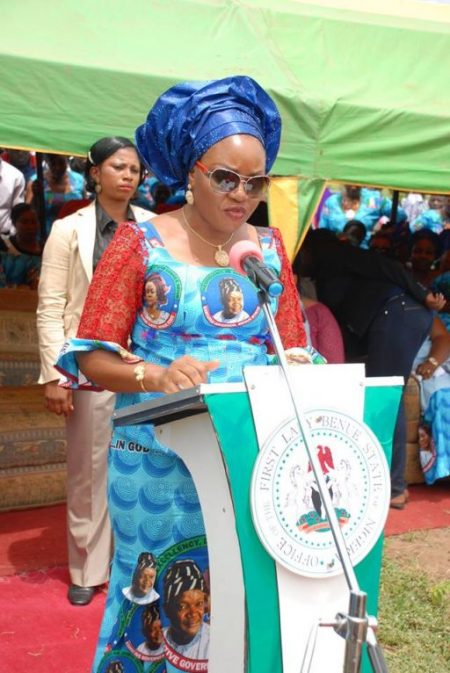 The Wife of the Benue Governor, Mrs. Eunice Ortom, has donated two cows and foodstuffs worth millions of naira to 300 widows and youths in the state.

Ortom donated the foodstuffs in Tse-Aondona-Naka in Gwer-West Local Government Area of the state.

Ortom, who hails from the local government area, said she made the donation so that her kinsmen would be able to celebrate Christmas and New year in merrily.

The governor’s wife, who was accompanied by her siblings and children, assured the people of the area that Gov. Samuel Ortom would uplift their living standard.

“We are aware that we do not have enough health care facilities, roads, schools and electricity and my husband has made adequate budgetary allocations to address most of the issues,” she said.

She urged the community to key into her pet project, ‘Eunice Spring of Life Foundation’ so that they would be empowered through skills acquisition programmes.

“The fastest way to help curb unemployment, idleness and help grow a state’s economy is through skills acquisition,” she said.

Contributing, Mr. Timothy Taryua, the Sole Administrator of the LGA, commended the governor’s wife for her kind gesture.

He assured her that peace and positive change would be encouraged in his tenure as sole administrator.

“We have projects to support the government on massive school rehabilitation and construction, healthcare facilities, roads and schools,” he stated.

Mr. Terver Wever, the General Manager, Property Development and investment, Benue Investment and Property Company, who accompanied the wife of the governor, emphasized the need to make girl-child education compulsory

The general manager urged parents not to give out their children for trafficking or allow them to engage in street hawking, but to ensure that they are enrolled in school.

“We are happy and appreciative of our sister and daughter and want more of our children to display such acts,” he said.

In his remark, father of the governors’ wife, Chief Julius Aondona, applauded her gesture and described her concern for widows and the disabled is laudable.

He prayed for God to bestow on her and her husband higher capacities and greater success in their endeavours.