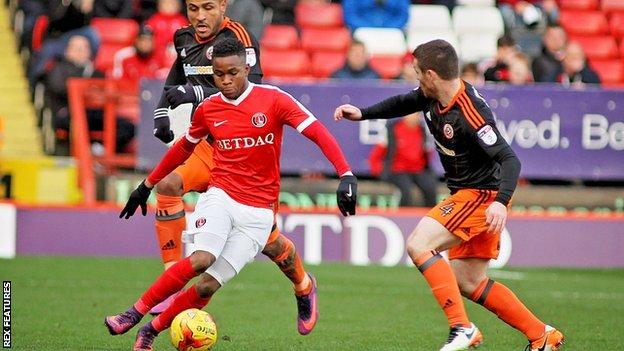 Lookman has scored five goals in 21 League One games for Charlton this season, and two more in the FA Cup

Director of Football Steve Walsh has made the signing a priority and the move is likely to go through quickly as manager Ronald Koeman starts what is expected to be a busy January.

Lookman scored his seventh goal of the season in Charlton’s 1-0 win at MK Dons on Boxing Day.

He was also linked with Crystal Palace.

When asked about Lookman at his press conference on Wednesday ahead of Friday’s Premier League away match with Hull, Koeman said: “There is interest for the boy, yes.”

Everton – with Walsh a key figure – are embarking on a policy of recruiting emerging young talent as well as established players.

The Toffees signed teenager striker Dominic Calvert-Lewin from Sheffield United for £1.5m in August and the England youth international has figured as a substitute against Arsenal and Liverpool recently.

Charlton had hoped Everton would loan Lookman back to them for the rest of the season but he is seen as someone who could quickly play a part at Goodison Park.

Koeman will also bid to tie up a move for Manchester United midfielder Morgan Schneiderlin in a deal that will cost around £20m.

Schneiderlin has been told he can leave Old Trafford by manager Jose Mourinho and Everton also have a strong interest in Koeman’s fellow countryman Memphis Depay.

The Netherlands attacker is also surplus to requirements under Mourinho.