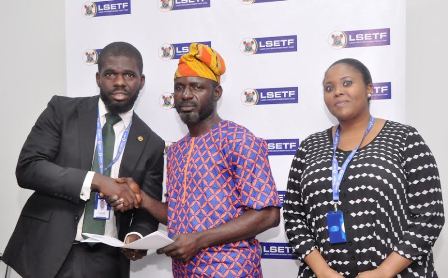 Executive Secretary of LSETF, Mr. Akin Oyebode, during the distribution ceremony at Billings Way, Ikeja, Lagos, Southwest Nigeria said the award of the offer letters was in fulfillment of one of the cardinal promises of the Governor Akinwunmi Ambode-led administration to set up a fund to drive the growth of the Micro, Small and Medium Enterprises (MSMEs) in recognition of their critical role as the engine of growth and leading creator of jobs in any economy.

Oyebode, who said the award of the offer letters was also an eloquent testimony of the readiness of the State Government to support the thriving youths and residents of the State, said a total of 1,000 MSMEs had been earmarked to benefit from the pilot scheme, out of which 281 micro enterprises had so far been approved.

He said out of those approved, 150 beneficiaries had collected their offer letters, while the process for approval for others in the pilot scheme was ongoing.

To ensure transparency and unbiased process, Oyebode said the LSETF engaged partners to help with the selection, verification and disbursement of the loans to beneficiaries.

“These partners include Price Waterhouse Coopers (PWC) who verified all the applications and audit the processes. Others include organizations such as the Fate Foundation, LEAP Africa, Nigerian Association of Small Scale Industrialists (NASSI), Women in Management, Business and Public Service (WIMBIZ), National Automobile Technicians Association (NATA) and Cooperative Societies, who provided applicants for the pilot scheme through their membership,” Oyebode said.

He added that application process was still ongoing and that once completed, a full list of beneficiaries would be made available to the public.

While disclosing details of the loan, Oyebode said the beneficiaries of the micro enterprise pilot scheme were given loan approval ranging from N300, 000 to N500, 000, with an annual five percent interest rate, which is the lowest anywhere in the country.

He said the LSETF was in the process of rolling out the N5 million SME loan programme which would provide fund for the sector for up to two years, adding that the N6.25 billion to be disbursed annually through the ETF has already been approved.

Besides, Oyebode expressed gratitude to all stakeholders for their support so far, and expressed readiness for greater cooperation in the coming months and years.

Responding, one of the beneficiaries, Mr. Chike Charles Obi expressed appreciation to the State Government, especially Governor Ambode for fulfilling his promise, saying that most of them did not initially believe that the offer was real, but just applied.

He said the development was a confirmation that Governor Ambode has brought real change to governance, and thanked the LSETF for being transparent and unbiased especially in choosing the beneficiaries.

Another beneficiary, Mrs. Modupe Shukurat Alausa urged her co-beneficiaries to encourage government by using the fund for the purpose meant. She also thanked Governor Ambode for running an all inclusive government.