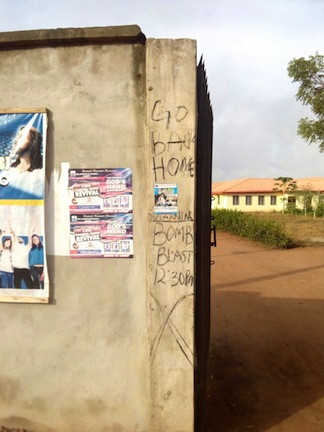 The bomb scare on the school fence

There was a pandemonium at the Federal College of Education (FCE), Yola, on Thursday over a bomb scare following the sighting of a strange bag in front of the school.

The development which obstructed traffic along the Jimeta-Yola Road for more than an hour, caught the attention of a team of policemen and soldiers.

The policemen from the Adamawa Anti-bomb Squad, who went into action immediately, however, discovered that the bag did not contain any explosives.

Abubakar, however, commended members of the public for their vigilance and urged them to always alert the police whenever they sighted any suspicious object.

The Chief Security Officer of the college, Mr Salihu Muhammed,who reported the incident to the police, said that the suspicious bag was abandoned by unknown persons and that was why they immediately alerted the police.

Muhammed dismissed rumors circulating that the bag was found in the school premises saying; “ it is completely untrue, the bag was abandoned outside the college”.