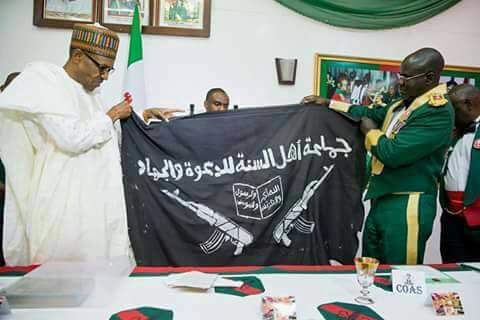 The Nigerian Army on Friday night in Abuja hosted President Muhammadu Buhari to Guards Brigade Regimental Dinner and presented to him the captured Boko Haram flag.

The flag was handed over to the President by the Theatre Commander, Operation Lafiya Dole, Maj. -Gen. Lucky Irabor.

While receiving the flag, President Buhari challenged the armed forces on the need to continue to ensure the survival of Nigeria as a geo-political entity despite what he described as “”political madness’’ being exhibited in some parts of the country.

According to him, it is duty bound for the army to ensure the sustenance of peaceful co-existence among the over 250 ethnic groups across the country.

“We will do our best to build the national institutions in the country.

“”All these political madness in the North East, the Niger Delta or in the East should not be allowed to cause division or any form of tension in the country.

““There are 250 ethnic groups, so keeping Nigeria one is a task that must be done, even for your personal reason you must make sure this country remains united and stronger,’’ he said.

President Buhari, who narrated his early military life in Abeokuta and subsequent redeployment to Zaire (now Congo), said he was almost killed while on duty even before enjoying his first salary as an officer.

The president, therefore, stated that he was conversant with the problems of the military having spent over 25 years in the service.

He recalled how his refusal to adhere to an advice from the IMF, World Bank to devalue the naira and increase prices of fuel and flour, as a military Head of State, led to his removal.

He said: “I refused and gave my reasons and the next thing I knew I was removed and detained for three and half years.

“As a civilian president I will do my best and I’m telling you all these because you are part of the leadership of this great country and God willing we will remain great.”

In his remarks, the Chief of Army Staff, Gen. Tukur Buratai urged the officers and men of the Guards Brigade to always maintain the courage and discipline they are known for in 2017 and beyond.

He assured that the military would continue their onslaught in the North East, and would not rest in mopping up of the remnants of the Boko Haram insurgents.

Buratai reassured that the Nigerian Army would remain apolitical in carrying out its duties to the nation.

The regimental dinner night, which was organized to mark the end of drilling year of the Presidential Brigade of Guards, afforded the officers of the brigade to socialize with their commanders.

The highlight of the occasion was the ‎inauguration of the PMB (President Muhammadu Buhari) Gymnasium at the Scorpion Mess in W.U. Bassey Cantonment by the President.

The event also witnessed the presentation of Souvenirs, Scorpion Magazine and Compendium of Guards Brigade as well as the conducts of the band by the President.

The Commander, Brigade of Guards, Brig.-Gen. Musa Yusuf, delivered the vote of thanks at the occasion which was attended by notable personalities including the representative of Senate President, ‎Sen. Leader, Ali Ndume and the Minister of the Federal Capital Territory, Malam Muhammed Bello.

Others are the National Security Adviser, Service Chiefs‎, the Inspector General of Police Ibrahim Idris, Presidential aides, among others.