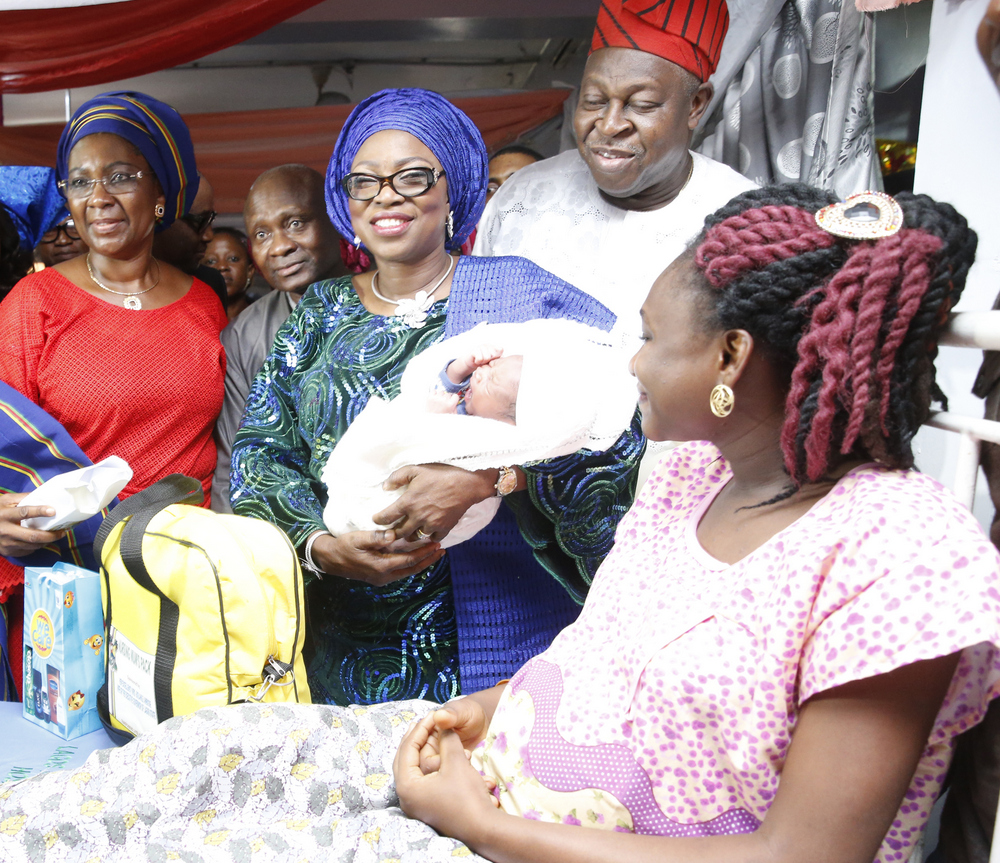 Wife of Lagos State Governor, Mrs. Bolanle Ambode on Sunday warned mothers against child killer diseases and charged them to always immunize their children against the diseases.

She also encouraged pregnant women to cultivate the habit of washing their hands to avoid infection.

Mrs Ambode, who spoke during the presentation of gifts to first babies of the year at three different health centres in the State, said it was important for mothers to always ensure that children have the full complement of routine immunization, while expectant mothers should always attend ante and post natal clinics.

The Wife of the Governor, during the celebration, presented gifts to first babies of the year at Badagry General Hospital, Amuwo Odofin Maternal and Child Centre and Lagos Island Maternity Hospital.

The annual First- Baby- Of-The-Year celebration started in 2000 and the Office of the First Lady, through the initiative, celebrates the first baby born from 12 midnight on new year’s eve.

Speaking at the occasion, Mrs Ambode said nursing mothers should take advantage of routine immunization provided by the State Government through the primary healthcare centres to protect their children.

She said: “I would like to encourage mothers to always ensure that children have the full complement of routine immunization available in all the primary healthcare centres across the State, and to also make good use of family planning services.

“Expectant mothers should cultivate the habit of washing their hands to avoid infection and should attend ante natal and post natal clinics regularly,” she noted.

She also thanked the corporate organizations that had partnered all the hospitals chosen for the first baby of the year programme and the State Government in the pursuit of excellent healthcare delivery, while urging other organizations to step up their corporate social responsibility efforts on worthy causes.

Mrs Ambode, however, counseled parents on the importance of birth registration upon delivery.

Earlier in his remarks, the commissioner for health, Dr. Jide Idris, noted that the administration of Governor Akinwunmi Ambode was committed to meeting the health needs of the residents of Lagos State.

Speaking further, Idris disclosed that the State had recruited 381 officers of various cadres during the year, to improve the health work force, stressing that the State would continue to stimulate quality health service poised to address existing health gaps.

Mum’s packs, baby essentials and other baby gifts were presented to the babies and their parents by the Wife of the Governor.

Thanking Mrs. Ambode on behalf of other parents, Mrs. Grace Ezekiel, expressed joy and prayed for the first family and the State.

The first baby was delivered in Badagry and Island Maternity at 12:01am simultaneously, both male, weighing 2.8kg and 3.1kg respectively.