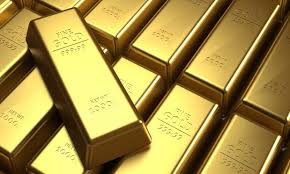 Gold fell on Tuesday as the dollar’s buoyant start to the new year kept the pressure on prices after the metal posted its biggest quarterly reduction in more than three years.

The themes of late 2016 appeared to be persisting in the wider markets in the new year, with equities bouncing while the dollar posted its biggest rise in three weeks.

Gold fell sharply in the wake of Donald Trump’s victory in November’s U.S. presidential election, sliding by more than 12

per cent in the fourth quarter. Trump’s victory boosted the dollar and sparked a sharp rally

in bond yields, lifting the opportunity cost of holding non-yielding gold and blunting investors’ appetite for the metal.

“The market has carried the theme of higher dollar, yield and stocks into 2017 — a formidable challenge to gold,” said

Saxo Bank’s head of research, Ole Hansen. There are some potential positives for gold, he added.

“We have plenty of event risks is month, with Donald Trump (taking office) on Jan. 20 being the biggest,” Hansen said.

“With exposure cut dramatically, we may see the selling pressure from long liquidation fade as most of the those adjustments

would have been carried out before year-end.” Hedge funds and money managers reduced net long positions in

COMEX gold to the lowest level in nearly 11 months and trimmed bullish bets in silver contracts in the week to Dec. 27.

Indications from the U.S. Federal Reserve that it would press ahead with further interest rate rises this year are buoying the dollar and pressuring gold.

“Further to the Fed’s interest rate hike in December, along with a bullish view of the U.S. economy and the prospects for three more interest rate hikes in 2017, gold might remain weak,” Sun Global Investments said in a note on Tuesday.

A strong start to 2016 meant that gold still managed to end last year with its first annual gain since 2012, rising 8.5 per cent.

Silver was steady on Tuesday at 15.93 dollars at once. Platinum group metals shrugged off the weakness in gold,

Palladium was the best-performing precious metal last year, with the price rising 20 per cent for its biggest annual gain in

Platinum lagged gains in the wider complex, however, ending 2016 only one per cent higher.