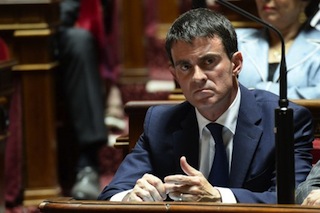 Manuel Valls, who quit as Socialist Prime Minister remains the clear favourite to win the left-wing primaries later in January, an opinion poll that was published on Thursday showed.

Valls resigned a month ago to prepare a campaign for this year’s presidential election.

He is seen coming top in the Jan. 22 first round vote with 43 percent, ahead of second placed Arnaud Montebourg, a former Economy Minister.

Montebourg who is set to win 25 per cent and third-placed Benoit Hamon on 22 percent, the report said.

He would go on to win the left-wing ticket by beating either of these two opponents in a run-off second round vote on Jan. 29.

This might be between 55 and 57 percent of the vote, according to the poll which is a similar outcome to other polls that was conducted in December.

Opinion polls of voting intentions for the presidential election itself show Valls closely associated with the record of unpopular outgoing President Francois Hollande with little chance of winning the presidency.

He is seen in a distant fifth place, eliminated after the April 23 first round.

The May 7 second-round run-off is likely to be won by conservative Francois Fillon over the far-right’s Marine Le Pen, those polls show.

The Harris Interactive poll was conducted online between Jan. 2 and Jan.4 among 6,245 people of voting age, of who 478 registered voters said they would definitely vote in the primary.