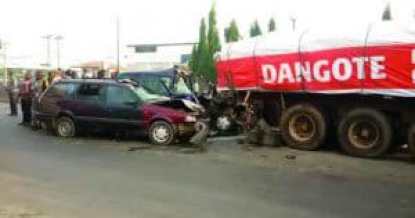 Dangote truck involved in an accident. They are now used to smuggle rice into the country.

The Federal Road Safety Corps (FRSC) Zamfara State Command has confirmed 15 persons dead in a ghastly accident which occurred along Gusau-Tsafe road in the early hours of Sunday.

He said the accident was caused by Dangote cement trailer driver, who lost control and ran into a Toyota Hiace, killing all the passengers.

The sector commander further said that three other persons who were in the trailer sustained various degree of injuries and had being taken to General hospital Tsafe for medical care.

He said 15 corpses were later deposited at the Tsafe general hospital mortuary while efforts were being made to contact their relatives.

He said the bus was coming to Gusau from Kano, while the trailer was on its way to Zaria.

He advised motorists to avoid over speeding which he said was largely responsible for the road crash.

He reminded road users of the need to avoid night journey especially during harmattan and raining season.

The sector commander also said the law on the used of speed limiting device had taking effect and that road users should comply.