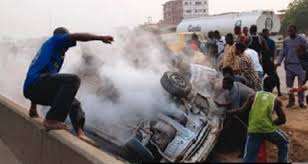 The Police Command in Enugu State has confirmed that nine people are in critical condition in two hospitals in Nsukka, after an auto crash on Jan. 8.

The spokesman said that there was a collusion between a Toyota Hiace bus ENU 681 XA and a Toyota Carina car CG 25 ENU.

“It was further gathered that following the collision, no fewer than nine persons comprising the drivers and the conductor of the Hiace bus with other occupants were critically injured.

“However, the police patrol team on the road was on hand to evacuate the injured victims on time to Enechi Hospital, Ukehe-Nsukka and Bishop Shanahan Hospital, Nsukka for medical attention and also clearance of obstructions to avoid further incident.

“As at the time of this report, victims are yet to communicate so as to establish their identities,’’ he said.

He said that investigation had commenced on the incident, adding: “the cause of the accident is yet to be established’’.