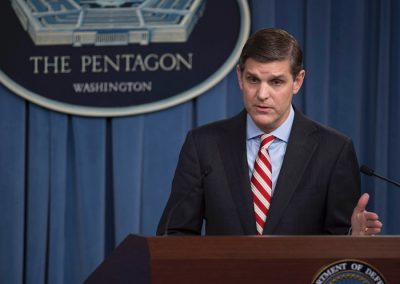 The U.S. has condemned Sunday’s vehicular attack on Israeli soldiers, saying it is ‘horrific’.

The U.S. Department of Defence said the country remains committed to Israel’s security and will stand by it to combat all forms of terrorism.

A statement by Pentagon Press Secretary Peter Cook expressed condolences to the victims.

“We condemn in the strongest terms possible today’s terrorist attack that targeted Israel’s defense forces and express our deepest condolences to the victims.

“The United States remains committed to Israel’s security and will stand with Israel to combat all forms of terrorism,” the statement read.

The Deputy Spokesperson of the U.S. Department of State, Mr. Mark Toner, also in a statement, said terrorism must never be tolerated.

“We condemn in the strongest possible terms today’s horrific vehicular attack by a terrorist in Jerusalem.‎

“There is absolutely no justification for these brutal and senseless attacks.

“We‎ condemn the glorification of terrorism now or at any time and call on all to send a clear message that terrorism must never be tolerated.

“Our thoughts and prayers are with the families of the four Israeli soldiers who were killed, and we hope for a full and fast recovery of those injured,” Toner said.