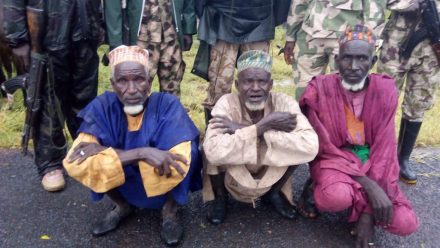 The DSS in a statement issued on Tuesday gave the names of the suspects as Fanayi Bukar Hassan, Butame Hassan, Kologoni Bukar, and Amina Abubakar.

According to the DSS, ”They were arrested on 10 January, 2017 at Oko-Oba, Ifako-Ijaiye LGA of Lagos State. They are suspected to have fled to the State to evade arrest in the ongoing military offensive in the North East.

Also today, the DSS said it arrested the leader of the Boko Haram sect in Okene, Abdullahi MOHAMMED aka Hujaat at Okene town, Adavi LGA, Kogi State. ”Subject had been responsible for the coordination of Boko Haram activities in Okene axis of Kogi State,” DSS stated.

In its determined counter-terrorism efforts to consolidate on the gains it has made in the sustenance of offensive against identified criminal gangs, kidnap syndicates and terrorist elements across the country, the DSS said it recorded major successes which have further degraded the capability of these elements to operate in the county.

”On 1st January, 2017, at Mutum Biyu in Gassol LGA, Taraba State, Bale Kolomi GREMA and Kolomi ADBA-AJI were arrested in a mosque after they had fled Marte, Borno State, where they were involved in boko haram terrorist activities. Also on the same 1st January, 2017, a kidnap suspect, Amadu BELLO, was apprehended at Hotoron Arewa, Nasarawa LGA of Kano State for his involvement in a kidnap operation at Zomo village, Ningi LGA of Bauchi State from which he got a share of N3m from the ransom.

”In a related development, on 6th January, 2017, one Paul ALI (aka Simplee), a high profile leader of a kidnap syndicate was arrested at Hill Flower Hotel, Asaga Ohafia, Abia State. ALI, who operates camps at Ikot Abasi and Mbo LGAs of Akwa Ibom State, is responsible for notable kidnap incidents across the Niger Delta. He is also a member of the Bakassi Strike Force (BSF) which has carried out attacks against oil installations in the area. At the time of his arrest, ALI, with his associate, Chidiebere KANU was planning the kidnap of a Federal Lawmaker and an expatriate. KANU is presently at large.

”In another incident, two (2) suspected Boko Haram insurgents, Ibrahim MALA and Abdallah MODU were arrested on 6th January 2017 at Amba and Gudi villages of Kokona LGA of Nasarawa State. The suspects who are indigenes of Maiduguri, Borno State, had fled the military action in Borno State and were regrouping in the State under different trade covers. While MODU sells children’s wears, MALA, who trades in perfumes, confessed to his membership of the sect and disclosed that he (Mala) joined the Yusufiyya faction in 2007. Similarly, Abdulkarim DAHIRU, a key terrorist commander and an indigene of Okengwa, Okene LGA of Kogi State, was arrested at the Specialist Hospital, Lokoja. Suspect was identified as the main coordinator of several kidnappings as well as other robbery activities in Kogi and Edo States.

”Furthermore, security operations conducted from 3rd to 7th January, 2017, across some flashpoints in Lagos State led to the arrest of seven (7) kidnap suspects, six of whom, namely; Gilbert Koku NELSON, John NELSON, Adekoya KAZEEM, Muhammad LAWAL, Abu YAHRO and Kelvin NWANAJI; were arrested in connection with the kidnap of a management staff of Dangote Company. The two (2) other suspects, Abdullahi BELLO, a Custom Officer and Bello GUMEL, were apprehended at Navy Town, Ojo LGA, and Naval Base, Alakija, respectively, in connection with the kidnap of another Custom Officer, on 20th December, 2016. Members of the above gang specialized in spying on senior company executives and laying ambush for kidnap and robbery operations for huge ransoms.

”On 7th January, 2017, one Muhammad AUWAL was arrested at Andaza village, Kiyawa LGA of Bauchi State in conncetion with boko haram terrorist activities. AUWAL who was arrested with the sum of three hundred thousand Naira (N300,000.00) on him, is believed to be a drug supplier to the Boko Haram sect in Sambisa Forest.

”Also on 7th January, 2017, the Service also arrested the trio of Elijah AWUA, Joseph EJAKA and Hope NATHAN, at Kanshio, Otukpo road, Makurdi, Benue State. The suspects are members of a notorious kidnap syndicate that has been responsible for several kidnap operations in Nasarawa, Benue and Plateau States. Their most recent venture was the gang’s abduction of a staff of Radio Benue, Makurdi on 2nd December, 2016. Suspects were arrested with a silver coloured Toyota RAV4 vehicle marked ABJ AQ 720 KUJ. Two (2) other members of the syndicate identified as Gabriel JOSHUA and TIMOTHY (FNU) are currently on the run and being trailed.

”On 8th January, 2017, one Bello MOHAMMED (aka Awilo), the leader of a syndicate that specialized in car theft and burglary in Gombe State was arrested at Jekadafari area of Gombe metropolis of the State. MOHAMMED confessed to being the kingpin of the syndicate in the State. His confession led to the arrest of an associate, Abdullahi IBRAHIM (alias DIBAL) who is seen at the arrowhead of the gang in the North East. IBRAHIM also disclosed that he has stolen ten (10) cars in Gombe. Based on his confession two (2) buyers of the stolen cars identified as Surajo Ali GOMBE, and Danjuma BAKA, have been arrested.

”On 8th January, 2017 about 1500 hours, one Elijah OYEBODE, aged twenty-two (22) years, was arrested in connection with the disappearance of one Damilola Rofiat ADEBISI (F), a 400 level student of the Department of Chemistry Education, Osun State University, Ipetu-Ijesa campus, Oriade LGA. The incident occurred on 22nd December, 2016. OYEBADE confessed to picking the victim along with two (2) other men on 22nd October, 2016 and claimed to have dropped them off at a house in Ikirun. Investigation is ongoing.

”It is important to state that these successes were recorded as a result of proactive and credible intelligence offered by patriotic citizens, and the effective cooperation of sister agencies and other relevant stakeholders. This Service wishes to restate its determination to sustain the tempo within the provisions of the law as part of its drive towards ensuring the security of lives and property of all law-abiding residents and citizens in the country, the statement signed by Tony Opuiyo on behalf of DSS stated.