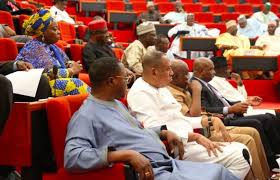 The Nigerian Senate on Wednesday confirmed the nomination of Mr. Ayine Anthony Mkpe as the Auditor-General of the Federation.

This was even as the Senate confirmed the receipt of petitions against the nominee with some Senators also standing on his way of confirmation.

The Senate had at its plenary session on Wednesday, 14th December, 2016 considered the request of President Muhammadu Buhari for the confirmation of the appointment of Mr. Ayine Anthony Mkpe to take over the office of the Auditor-General of the Federation.

Consequently, the Senate, after careful deliberations referred the request to the Public Accounts Committee, for further legislative action. DAILYPOST reports

Presenting the report of the committee at the Wednesday’s plenary, the Chairman, Senator Andy Uba said, “The committee examined his educational qualifications, career progression, experience, character, Federal Character principles, understanding of the functions of the Office of the Auditor-General for the Federation, etc”.