Breaking: Senate calls for suspension of ban on vehicle importation by land 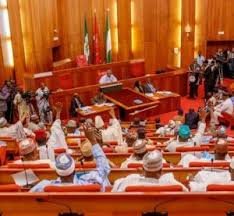 The Senate has called on the Federal Government to suspend action on enforcement of the ban on the importation of vehicles through land borders.

This followed the unanimous adoption of a motion by Sen. Barau Jibrin (APC-Kano), which was co-sponsored by four other senators, at plenary on Wednesday.

The senate also mandated its Committee on Customs, Excise and Tariff to investigate the circumstances that led to the ban by the Federal Government.

Leading debate on the motion earlier, Jibrin said the ban would lead to loss of no fewer than 500, 000 jobs.

According to him, people engaged in the business of vehicle importation and handling services in the border areas are already losing their jobs.

Jibrin said that it was disheartening that such policy would be implemented knowing that it would create hardship, particularly for border villages that depended on the activities to survive.

“Since the announcement through the Nigeria Customs Service, Nigerians have spoken out and they still do.

“They maintain that it is not economically expedient to ban the importation of vehicles through land borders.

“It is a concern that the decision was ostensibly premised on the allegation that the importation of vehicles through land borders no longer holds good prospect for the revenue generation because of large scale evasion of import duties.

He said that from his experience as a one-time controller of customs, it would be difficult for the government to implement such policy.

Wakili explained that the after-effect of the policy would be more than what the government intended to achieve.

According to him, I am in total support of what the Federal Government is going to do to ensure that the budget is implemented in terms of revenue generation.

“But, it will be very difficult for us to impose this ban. The Custom Service will be overstretched; there will be hostilities from the border communities and there will be rise in transnational crimes.’’

He reminded the lawmakers that Nigeria was “ big brother’’ to other countries in West African, and pointed out that the ban would affect its relationship with those countries.

Former Leader of the Senate, Ali Ndume, said Section 14 (2b) of the Constitution stated that the purpose of governance was security and welfare of citizens.

According to him, the situation has led to rise in unemployment and poverty, and anything that would create employment should not be discouraged.

“Government policies must be popular because the government is for the people. If you are coming up with new policies, you should engage stakeholders and know what to do.

“And, if this policy will be implemented, there should be time line so that people that will be affected will find alternatives,’’ he said.

Also supporting the motion, Vice Chairman, Committee on Foreign Affairs, Shehu Sani, said that enforcing of the policy would have adverse effect on the economy, contrary to what government planned to achieve.

“This is one country out of so many that has decided to strangulate a large section of its populace that live within the land borders.

“The country is also strangulating businesses that have provided jobs to hundreds of thousands and millions of Nigerians,’’ he said.

In his remarks, Deputy President of the Senate, Ike Ekweremadu, who presided, said that it was necessary for the Federal Government to revisit the policy, which many Nigerians were not comfortable with.

He stated that because the government was accountable to the people, “the executive should yield to the concerns of the people by suspending the ban because we are in office at their instance.

“So, if they said this is what they want, we should respect their stand.’’