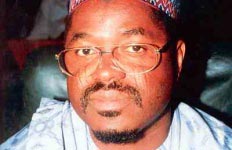 The remains of former Governor of Niger, Abdulkadir Kure, was laid to rest on Wednesday in Minna.

Kure died on Sunday, Jan. 8, in a private hospital in Germany at the age of 60 years.

Due to unprecedented crowd, the body of late Kure could not be brought out of the ambulance as the funeral prayer was conducted.

Also at the funeral were the Speaker, Niger House of Assembly, members of the Niger
executive council, National Assembly members, top government officials, as well and politicians.

In his tribute, Gov. Bello of Niger said the people would continue to be proud of the deceased’s contributions to the development of the state and the country in general.

He said the deceased had offered useful advice to the government and people of Niger on how to move the state forward.

The governor added that “we share things in common èven though we belong to different political parties because he has the interest of Niger at heart.

“He was honest, humble, committed, sincere and complete gentleman and ever willing to help his country, state and community when he held various public offices.

“We will continue to pray for the deceased for his tremendous contributions to the socio-economic and political development of our state.”

Late Kure left behind one wife and six children.