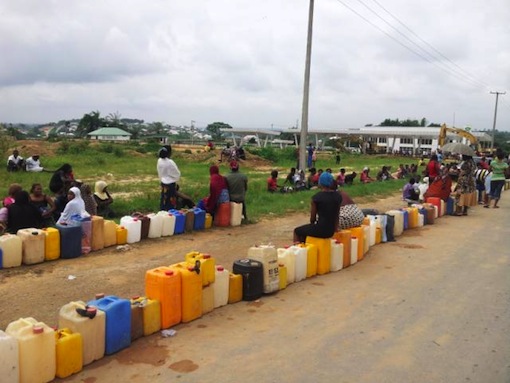 Some residents of Nsukka in Enugu have decried the scarcity of kerosene in the town which has resulted in the product being sold for as high as N300 per litre.

The commodity sells for between N280 and N300 per litre at filling stations as against the official pump price of N150.

The residents of the town on Thursday that the situation had put them into more difficulties as they resort to cooking with firewood and charcoal.

A widow, Mrs Stella Ezema, said the situation was bad as she would manage to buy food items but getting kerosene to cook it for her children has become a problem.

“I have not seen this kind of situation before where you will have food items in the house but what to cook them with becomes a problem.

“Because of the high cost of kerosene, the prices of firewood and charcoal have also doubled as the quantity of firewood we used to buy for N250 now sells for N500.

“As a result of this high cost of kerosene, I now avoid cooking food like beans that last long even though my children like eating beans,’’ she said.

Mrs Ijeoma Amadi, a trader, urged the Federal Government to quickly restore the pump price considering that it was what poor people use to cook and light their hurricane lamps at night.

“Everybody knows that with the economic recession in the country, things are hard but this astronomical increase in the price of kerosene has added to the suffering of the poor.

“Government should intervene quickly to ensure that owners of filling stations sell the product at the official pump price or seal stations that default to deter others.

“It will be unfair if the government should fold its hands and watch kerosene marketers continue to exploit poor Nigerians,’’ she said.

A civil servant, Mr Andrew Ezeugwu, said the government should find out what was responsible for the scarcity of kerosene.

“It was during the Christmas period that the price jumped up. Before the Yuletide, the price was between N200 and N220.

“I spend about N5,000 now to buy kerosene in a week as my family members are used to hot water bath both morning and night.

“Government should swing into action and fish out those responsible for this scarcity before the poor people will start to die of hunger,’’ he said.

A manager in one of the stations in Nsukka town, who spoke to NAN anonymously, said that selling a litre for N300 was not to exploit their customers.

He explained that it was because of the high cost of the product both in government and private depots.

“The price of what we sell to customers is determined by what we buy from the depots.

“Government should ensure kerosene marketers buy at normal price from depots so that they can sell at the official pump price.”

As at the time of this report, majority of the stations in Nsukka town do not have kerosene to dispense to the public who go from one station to another to buy the product.