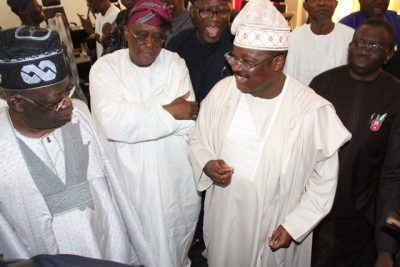 Leaders of the All Progressives Congress in the South West led by the former Governor of Lagos State, Asiwaju Bola Tinubu were in Ibadan, the Oyo State capital, on Thursday for a strategic meeting to reposition the region for it to occupy its rightful position in the country.

They told newsmen after the meeting that they had resolved to re-assert their influence in the progressive politics of the country, stressing that there is no division among party members in the region.

They also said that they resolved all issues concerning the governance of the country and what should be the role and influence of the group in the interest of the country for the progress of the people.

Addressing the media at the end of the meeting, Aremo Osoba said the group examined the government it helped in bringing about and have also reviewed all issues concerning the governance of the country, adding that the party leader would forward all issues discussed to the appropriate quarters.

He said the leaders also related with the party’s representatives at the National Assembly, the governors, party leaders on all issues and assured that henceforth, there would be total unity and due consultation among the governors for the development of the region, and the country at large.

”We have related with our representatives at the National Assembly, our governors, our other party leaders on all issues and we discussed them exhaustively. I can assure you that from now onwards, there will be total unity and due consultation among the governors for the development of the region and the country at large”.