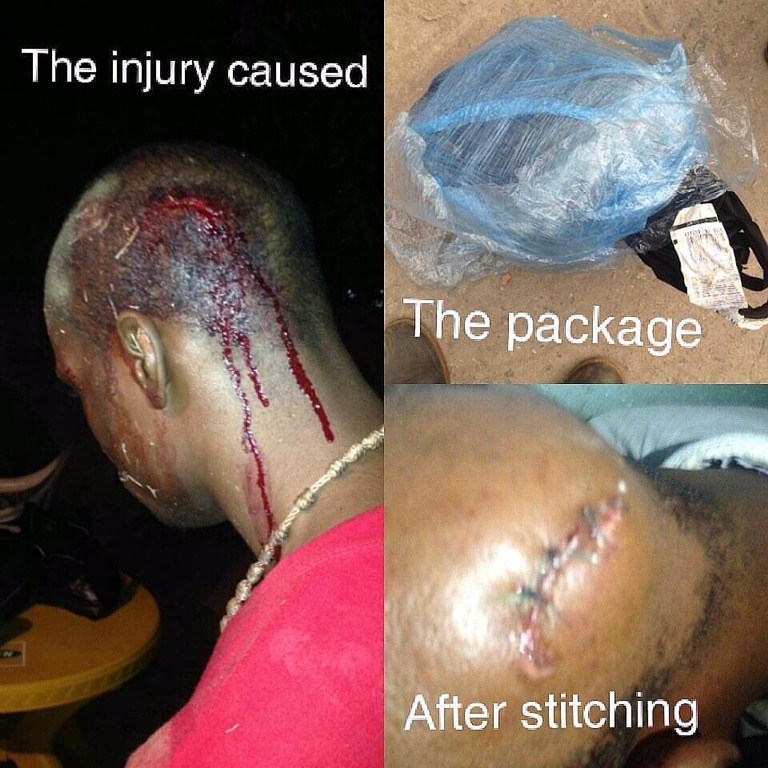 A Nigerian police officer Ali Makinka has allegedly brutalized one Bamisaye olasunkanmi Michael a.k.a Catty Mandy, due to his greed to forcefully collect a package sent to Michael by his brother in South Africa.

Michael shared the story on his Instagram page as thus:

“My name is bamisaye olasunkanmi Michael a.k.a Catty Mandy a Nigerian citizen and this was my encounter with the Nigerian Police.

After my regular day job, I went to the airport to receive my package which was sent to me by my brother from South Africa.

I successfully received my package and headed home.

It was late by the time I was going home,11:30pm precisely and I was waiting for a bus at the popular Naco bus-stop.

The Naco bus-stop is along the international airport road,not too far from the airport itself.

There were people at the bus-stop waiting for a bus as well. Just then 3 policemen arrived on a bike.

This was not surprising because there is a police station at Naco bus-stop.

They cited my package and this prompted questions immediately.

They asked what was in the package, I responded by telling them it was my personal belongings which was sent to me by my brother from the South Africa and I just received it from the airport that night.

Immediately they shouted “it’s a lie,it’s money that is there”.

They scared everyone around away and started assaulting me with questions.

I told them it wasn’t money that I should open it for them to see but they wouldn’t listen,one officer ALI MAKINTA was one of the 3 policemen that lead the assault InstaBlog 9ja reports.

They hit me very hard with the back of their gun, I started bleeding and I fainted. They took my package and my phone. They left me lying on the floor bleeding to death. Few minutes later a Nigerian Army came to my rescue.

Captain Akinleye helped me to recover my phone, took me to the nearest hospital for attention where my wounds were stitched, took me home and gave me his number to call when I felt better. Thank God for him that night.

Our policemen now steal from us under the umbrella that they are protecting Nigeria from fraudsters(Yahoo guys), and beacuse of this every guy is a fraud. If you have a laptop they’ll take it from you or ask for bribe.

If you own an iPhone they’ll take it and it become theirs automatically. If you own a car they’ll take you to their station for statement. And now I’m seen with a package containing my personal belongings they beat me close to death and take it away from me.

I am voicing out to the government and the citizens of Nigeria, the police is not our friend. We need true policemen not the ones who are wolves in sheep’s clothing.

We need to flush out this criminals who hide under the law that they manipulate to their convenience and endanger us to destroy us because of their greed. I say NO to fake Nigerian Police. I say NOOOO!”