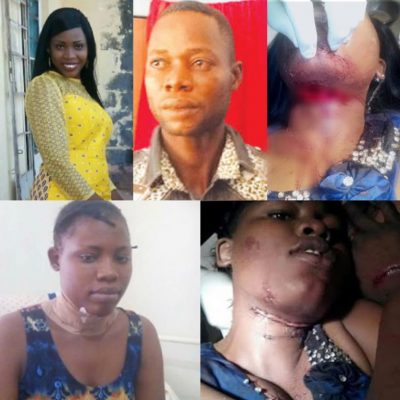 An enraged lover, Luka Shuaibu, who attempted to slit the throat of his girlfriend, following suspicion of unfaithfulness, has been sentenced to 12 years imprisonment for attempted murder and causing grievous bodily harm.

In October, 2016, Shuaibu, a diploma student in the Department of Tourism and Leisure Management, Adamawa State Polytechnic, attempted to slit the throat of his girlfriend, Sekina Ishaya, Punchng reports.

Sekina, also a Tourism and Leisure Management student, was attacked by her angry lover after allegedly seeing her with another man. Shuaibu was sentenced last Wednesday to 12 years imprisonment without option of fine.

Shehu Ahmad, the Chief Magistrate of the Yola Magistrate Court, while passing his sentence, said the court found the accused guilty of an attempt to commit culpable homicide and causing grievous bodily harm to his female lover.

The magistrate said the sentence was based on the witnesses, testimonies as well as admission of guilt by the convict, noting that the parties could file an appeal if not satisfied with his judgment.

According to Insp. Akamu, the police prosecutor, Shuaibu bagged 7 years for committing grievous bodily hurt and another 5 years for attempted homicide, without any option of fine, bringing the sentence to 12 years.