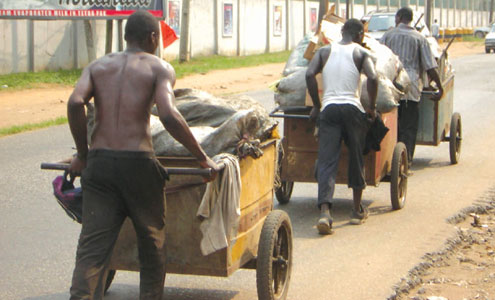 Cart pushers: Two cart pushers die in a fight over who should carry some goods purchased by a trader at Cemetery Market in Aba, Abia State.

A truck pusher, Wilson Sunday, on Friday appeared before a Federal High Court in Lagos over drug trafficking.

Sunday, 27, pleaded guilty to the charge brought against him by the National Drug Law Enforcement Agency (NDLEA) on the offence.

Following his plea, the Prosecutor, Mr Jeremiah Aernan, prayed the court for a date for review of facts and asked that the accused be remanded in prison pending the review.

Consequently, Justice Abdulazeez Anka adjourned the case to Jan. 19 for review, and ordered that the accused be remanded in prison pending the date.

In the charge, the accused was said to have committed the offence on May 25, 2016.

The prosecutor said that the accused was arrested at the Cele area of Ojo in Lagos, where he sold wraps of Cannabis Sativa also known as Indian hemp.

According to him, the narcotics recovered from the accused weighed about 1.3 kg.

He said that Cannabis was classified as a restricted narcotic bearing similar nature with cocaine and heroin LSD.

The prosecutor said the offence contravened the provisions of Section 11 (c) of the NDLEA Act, Cap N30, Laws of the Federation, 2004.