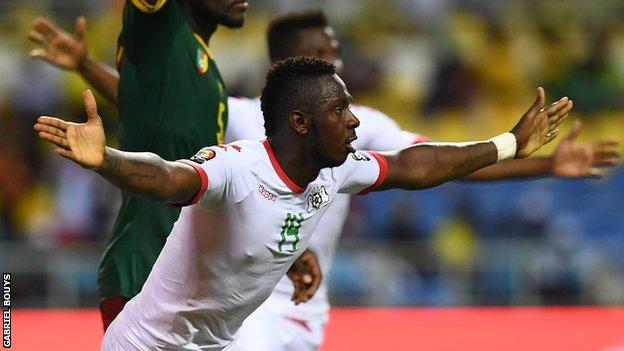 Burkina Faso fought back to secure a 1-1 draw with Cameroon on the opening day of the 2017 Africa Cup of Nations.

Cameroon took the lead on 35 minutes when Benjamin Moukandjo superbly curled a free-kick into the left corner.

Both sides created good chances, with one of the clearest falling to Clinton N’Jie who shot wide from six yards.

The Burkinabe took full advantage when goalkeeper Fabrice Ondoa could only parry a free-kick and Issoufou Dayo nodded in the leveller.

Cameroon had been given numerous warnings as the Burkinabe repeatedly threatened from set-pieces – and the Indomitable Lions will also rue their inability to finish their opponents off when they had their own chances.

In contrast to the earlier Group A game between hosts Gabon and Guinea-Bisau, which was also played in Libreville’s Stade de l’Amitie, this match had plenty of action.

Ondoa saved well from Prejuce Nakoulma’s near-post poke and Bakary Kone fired the rebound wide. Kone later had the ball nicked away from his head when he looked set to score, while Nakoulma was also denied a second time, by Ondoa’s athleticism.

At the other end, N’Jie forced a smart, low save from Burkinabe keeper Herve Koffi, who later surged out of his penalty area and produced a stunning tackle with an outstretched leg to stop a clean-through Christian Bassogog.

N’Jie, on loan at Marseille from Tottenham, was guilty of the worst miss of the match after he collected the rebound from a fierce long-range shot by Jacques Zoua and shot wide with the goal gaping.

As Cameroon’s ill-discipline presented the Burkinabe with more and more free-kicks, there was a growing sense that would do well to to see out the victory.

And so it proved when Dayo finally putting the finishing touch to a set-piece.