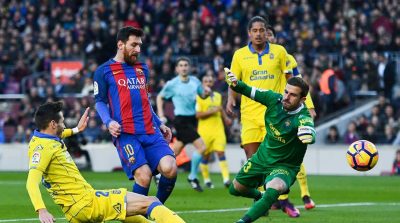 Suarez turned in an Andre Gomes cut-back for the only goal of the first half, but hosts Barca then scored three quick goals after the break.

Lionel Messi tapped in and Suarez then steered a lovely shot into the corner, before Arda Turan made it 4-0.

Aleix Vidal’s first goal for the club, placed into the corner from a Paco Alcacer pass, completed the rout.

Messi’s long-term future at the Nou Camp has been the subject of speculation for months.

This has been with little sign of progress in negotiations to extend a contract that runs out at the end of next season.

With talks seemingly at a delicate stage, FC Barcelona sacked an official who appeared to play down the Argentina forward’s value to the club.

Pere Gratacos, Barcelona’s head of sporting relations, suggested on Friday that it was the club’s other big names who make Messi as good as he is.

The controversy did nothing to shake Messi off his stride, though, as he maintained his excellent form.

He went close with a couple of free-kicks, one in each half, while his goal was a classic piece of poaching.

The striker timed his run into the middle perfectly, anticipating that goalkeeper Javi Varas might spill a driven Rafinha cross.

He was in the right place to score for the seventh game in a row — his 26th goal of the season.

Having dropped two points — and very nearly three — in a 1-1 draw at Villarreal last weekend, FC Barcelona had to win here to remain in touch with leaders Real Madrid.

With Real Madrid facing a Sunday trip to Sevilla, who started Saturday above Barca in second place, manager Luis Enrique knew this was the weekend to potentially make up ground.

Yet he took a risk in his team selection, resting Andres Iniesta, Gerard Pique and Neymar to keep them fresh for a congested schedule.

This includes two Copa del Rey matches against Real Sociedad in the next fortnight.

Enrique was bitten badly by rotation in September when, with one eye on the Champions League, he made seven changes for a home league game against promoted Alaves.

This time, there was no slip-up against a Las Palmas side without an away win in La Liga since the season’s opening weekend.

He kept his cool to steer a loose ball into the net after Suarez had sprinted clear and been denied by Varas.