19 drown as boat capsizes in India 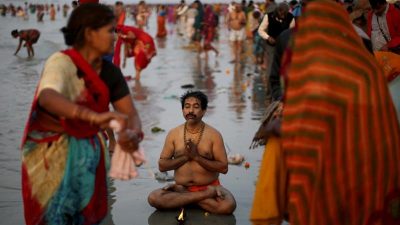 The boat's passengers were returning from the Makar Sankranti celebrations

At least 19 people have died in India’s eastern state of Bihar after a boat sank in the Ganges River, according to police.

The reported 40 passengers on board were returning on Saturday from watching a kite-flying celebration to mark Makar Sankranti, a religious festival that is believed to carry the arrival of spring.

“We can confirm that 19 people have died.”

Chandrashekhar, the state disaster management minister, told Reuters news agency the boat was overcrowded and only had an initial capacity of transporting up to 30 people.

The vessel did not make it far from the boat station in the state capital, Patna, when it tipped over and began to sink further into the sea, close to the annual festival’s site.

Chandrashekhar said an estimated 10 to 12 people managed to swim back to shore.

The minister added that eight were rescued form sea and have been admitted to a hospital for medical treatment.

“We believe a minimum of four to five (more) bodies may be in the river,” he said.

However, an exact figure of missing victims could not be ascertained.

Local TV footage showed emergency workers searching for possible survivors underwater, while families waited for a verdict on shore. Search missions were reportedly overseen by senior officials, who camped at the site of the accident.

Boat accidents are common in India, due to the overcrowding, poor maintenance and lack of safety equipment.

About 20 people lost their lives when a ferry capsized in a rain-swollen river in India’s northeastern state of Assam in September 2015. Similarly, more than 100 people died in Assam after a boat sank in the Brahmaputra River during a heavy storm in 2012.