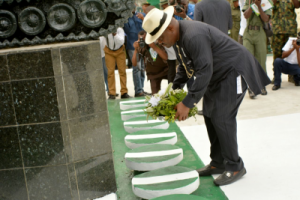 Picture 2: Rivers State Governor, Nyesom Ezenwo Wike laying a wreath at the cenotaph of the unknown soldier to mark the 2017 Armed Forces and Remembrance Day Celebration in Port Harcourt on Sunday.

Addressing legionnaires at the 2017 Armed Forces and Remembrance Day Celebration finale at the open court of the Government House, Port Harcourt on Sunday, Governor Wike said that the N100 million empowerment scheme was an appreciation of the fact that the late ex-servicemen and their living colleagues invested their lives in the sustenance of the country.

He said: “This empowerment scheme is to show the families of late ex-servicemen and their living colleagues that we appreciate the sacrifices they made for the country.

“We don’t want the families they left behind to continue to suffer. I urge the Nigerian Legion to carefully manage the empowerment scheme in a way that the wives of late ex-servicemen and other legionnaires will benefit and set up businesses to sustain themselves”.

He called on corporate citizens and privileged Nigerians to take practical steps to appreciate members of the Nigerian Legion and their families.

The governor said that the remembrance of the sacrifices of living and late members of the armed forces should go beyond the annual ritual of Armed Forces and Remembrance Day Celebration.

He called on Nigerians to re-dedicate themselves to the service of the nation by following the examples of members of the armed forces.

Governor Wike commended the Nigerian Armed Forces for dislodging Boko Haram from the Sambisa forest, pointing out that the feat would lead to increased peace in the country.

He lauded President Muhammadu Buhari and the Service Chiefs for strengthening the Armed Forces to take up elements who threaten the peace of Nigeria.

In his remarks, Chairman of the Nigerian Legion in Rivers State, Col Wilberforce Josiah (retd) commended Governor Wike for his support to the legion.

During the celebration of the 2017 Armed Forces and Remembrance Day Celebration at the Isaac Boro Park in Port Harcourt, Governor Wike inspected the guard of honour, took the national salute and released the pigeons of peace.