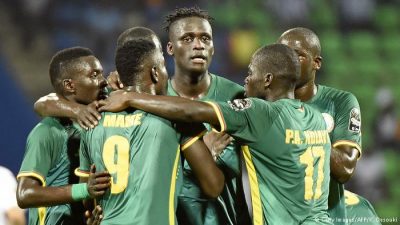 Senegal’s Teranga Lions began their 2017 Africa Cup of Nations (AFCON) campaign in Gabon on Sunday with victory over Tunisia in Group B.

Tunisia almost took the lead in the opening two minutes, but Ahmed Akaichi’s header skimmed the post and he later smashed a shot narrowly wide.

In between, Senegal took the lead through Sadio Mane’s penalty kick after Cheikhou Kouyate had been hacked down.

Kara Mbodj powerfully headed in a second, and almost scored an own goal when his clearance struck the post.

Tunisia were guilty of missing plenty of chances, in particular Youssef Msakni, who headed wide from two yards out and shot straight at Abdoulaye Diallo in the second half.

The News Agency of Nigeria (NAN) reports that victory for Aliou Cisse’s side means they top their group after Algeria’s surprising 2-2 draw against Zimbabwe earlier in the day.

Tunisia have won the tournament once, in 2004, but Senegal have never lifted the crown, with their best performance coming in 2002 when they lost on penalty kicks to Cameroon.

This year could be a different story with a side containing Napoli centre-back Kalidou Koulibaly, West Ham’s Kouyate and Everton’s Idrissa Gueye in midfielder, as well as Liverpool’s Mane.

Africa’s most expensive player —- following his £34m move from Southampton to the Reds in the summer —- caused the Tunisian backline problems with his pace.

He coolly tucked his spot-kick into the left corner.

NAN reports that Senegal could have had another, but Ismaila Sarr’s cross came back off the bar in the second half.(