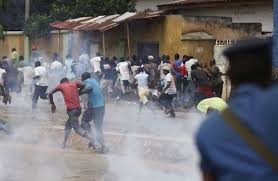 Many vehicles were damaged on Wednesday in Kano following a clash between operatives of Kano Road Traffic Agency (KAROTA) and some illegal motor park operators at Gyadi-gyadi area in Kano metropolis.

An eyewitness said the clash started around 11:00 a.m when the KAROTA officials stormed
the illegal motor park.

The eyewitness said that trouble started when the KAROTA officials wanted to stop the park operators, who were members of the National Union of Road Transport Workers (NURTW), from carrying passengers at the park.

It was gathered that many vehicles belonging to both parties were damaged during the fracas.

DSP Magaji Majiya, the Kano State Police Public Relations Officer, confirmed the clash, saying that the command had since deployed men to the area to restore peace and order.

“As I am talking to you now, we are at the scene and normalcy has since been restored in the area.

“No casualty was recorded, but a number of vehicles belonging to both sides were damaged, ” Majiya said.

He said that the police had ordered immediate closure of the park until the issue was resolved between the state government and owners of the park.

He said the police had commenced investigation into the matter to find out the cause of the incident.