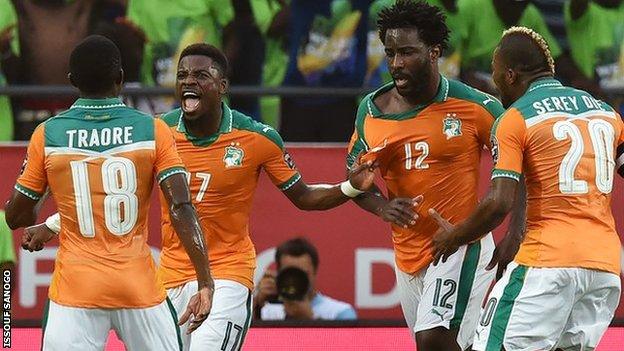 Champions Ivory Coast twice pegged back DR Congo to earn a 2-2 draw and keep alive their hopes of reaching the Africa Cup of Nations quarter-finals.

A clever throw-in routine was finished off by Neeskens Kebano’s low drive to put DR Congo 1-0 up but Wilfried Bony equalised with a powerful header.

DR Congo, who will not make the last eight, regained the lead two minutes later when Junior Kabananga headed in.

Ivory Coast salvaged a point when Serey Die’s 20-yard shot was deflected in.

Salomon Kalou was denied a late winner for Ivory Coast when he volleyed in superbly but the goal was ruled out for offside.

The result leaves Group C congested – at least until Friday’s late game between Togo and Morocco.

Ivory Coast teetered on the brink because of some poor defending.

They failed to pick up the runs of Kebano and Kabananga for the DR Congo pair’s goals and were also fortunate when Firmin Ndombe Mubele’s shot clipped the post after he had easily held off two defenders.

But in Bony they had a serious aerial threat and the on-loan Stoke forward gave a warning when he headed over from a long ball over the top by Serge Aurier. Soon after he powered in a downward header from a corner for his side’s first equaliser

The Ivorian’s second leveller had an element of good fortune as Die’s drive was diverted in off a defender.

A tight offside decision then went against Kalou, who had brilliantly volleyed in from Aurier’s free-kick.