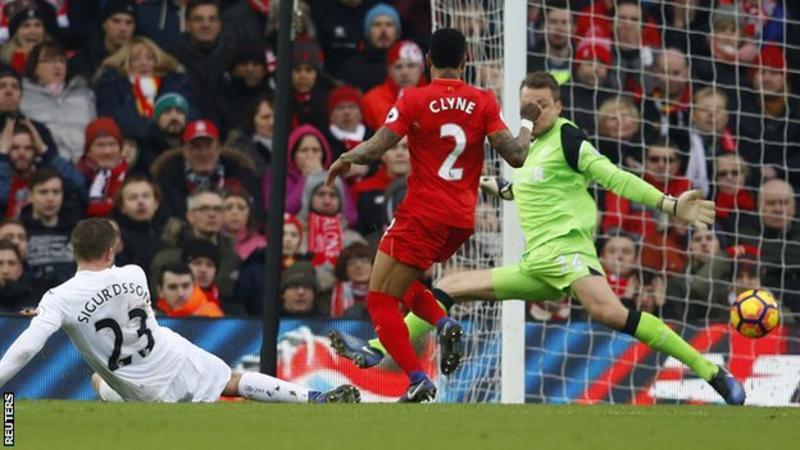 Swansea lifted themselves off the bottom of the Premier League table and dealt a huge blow to Liverpool’s title hopes with a thrilling win at Anfield.

Gylfi Sigurdsson scored from close range with 16 minutes left to give Paul Clement his first win as Swans boss and the club their first away league victory over the Reds.

Roberto Firmino had struck twice to draw the hosts level after Fernando Llorente’s two goals in four minutes after the break.

The defeat leaves Liverpool seven points behind leaders Chelsea, who now have a game in hand, at home against Hull on Sunday.

The Tigers are one of three teams, along with Sunderland and Crystal Palace, leapfrogged by Swansea, who move up to 17th after only their second win in eight league games.

In the wake of last weekend’s demoralising 4-0 defeat by Arsenal, Clement said Swansea would be “naive” to ignore the possibility of Premier League relegation this season.

On the evidence of their performance at Anfield, it would be equally naive of anyone to write them off.

In the space of seven days they have gone from a side who collapsed at the first setback to one capable of rallying under extreme pressure.

Their first-half defensive display – which saw them restrict Liverpool to a couple of half-chances – belied their status as the club with the division’s most porous defence.

Their second-half performance was clinical, epitomised by Llorente’s two strikes – a close-range finish following Federico Fernandez’s header from a corner, followed by a header from Tom Carroll’s cross – and Sigurdsson’s decisive, well-placed finish. These were there only three efforts on target.

It was also gutsy. They had to dig very deep against a side who, before Saturday, were unbeaten in the league in over a year at home and who had scored 26 goals in their previous nine league games.