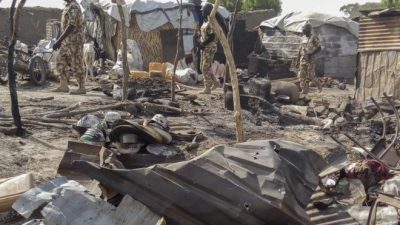 The attack left wreckage where people had been taking shelter

The number of people mistakenly killed last week in an air attack on a camp for those who have fled conflict in north-east Nigeria has been revised to 115, an official has told the BBC.

Camp residents and aid workers were among those killed when the air force bombed Rann, in Borno state, thinking it was a base of Boko Haram militants.

It was the biggest known botched attack in eight years of fighting the group.

The Nigerian army says it is engaged in a “final push” against the Islamists.

Commanders have apologised for the “accidental” bombing, which they said was because of “the fog of war”.

Human Rights Watch said this did not absolve them of responsibility, and called for compensation for the victims.

A local government official from the area, Babagana Malarima, said a mistake had been made when it was earlier reported that the number of those killed had risen to 236.

The error had been made by those in the camp settlement who had added the number of dead to the number of injured to come up with the figure, he told the BBC.

In the immediate aftermath of the attack last Tuesday, the medical charity MSF said 52 people had died.

The wounded were treated in an MSF tented clinic as there are no hospitals in Rann, where displaced people are living in makeshift shelters.

An aid worker told the BBC that the attack, in which at least two bombs were dropped, caused terror and chaos at the camp.

He said he saw dead children lying on the ground, others left as orphans and terrible injuries among survivors.

Aid workers estimated 20,000-40,000 people had been sheltering in Rann, near the border with Cameroon, after fleeing attacks by Boko Haram.

The emergency services official, who spoke to the BBC on condition of anonymity, said all those who had died at Rann had now been buried.

Those critically injured were still receiving treatment in the state capital, Maiduguri, while others were being treated locally by international aid agencies and local services.

The Red Cross has said it has distributed food to more than 25,000 people in Rann since Saturday.

It said they had received enough rice, beans, oil, salt and corn soya blend to last for five weeks.

“People in Rann were happy to receive food. They have been isolated by rains and poor quality roads since June and running very low on food supplies,” said Red Cross economic security coordinator Mohammed Sheikh-Ali.

“At the beginning of January, we laid sand bags on the road for our trucks to be able to cross. We got 12 trucks full of food to Rann last week on the day of the air strike, which prevented us [from distributing]. As soon as medical evacuations were over, we organised the distribution with the help of the community.”

Twenty aid workers from the Nigerian Red Cross were among the casualties in the air attack.