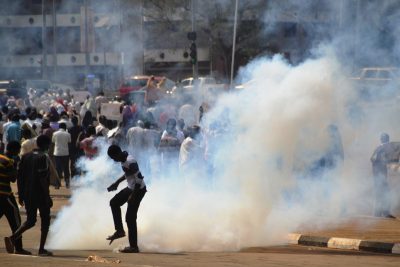 Armed military personnel took over security duty at the main gate of the National Assembly in Abuja on Wednesday.

This followed a clash between police and the members of the Islamic Movement of Nigeria who staged a protest demanding the release of its detained Sheik Ibraheem El-Zakzaky.

An Abuja Federal High Court had in 2016 issued an order for the release of El-Zakzaky.

However, the protest turned chaotic when the police attempted to deny the protesters access to the road leading to the National Assembly complex through the Federal Secretariat.

They fired tear gas canisters and made some arrests.

The incident led to the deployment of military personnel from the presidential guard to the scene.

Gates to the NASS were shut to prevent the members of the sect from invading the complex.

The protesters then marched to the nearby Federal Ministry of Foreign Affairs to continue the protest.