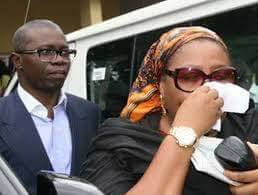 Mrs Adaoha Ugo-Ngadi, the Managing Director of Ontario Oil and Gas Ltd, was on Thursday sent to jail for 10 years for defrauding the Federal Government of N754 million in oil subsidy transactions.

Justice Lateefa Okunnu of an Ikeja High Court handed down the verdict, the first conviction since the massive oil subsidy fraud trial allegedly perpetuated by oil marketers began in 2012.

Walter Watgbatsoma, Ugo-Ngadi’s co-defendant and the Chairman of Ontario Oil and Gas Ltd, was absent in court for the judgment.

He is currently being held in the United Kingdom on charges relating to a £12 million National Health Insurance Scheme (NHIS) Trust fraud.

Okunnu, in her judgment, sentenced Wagbatsoma and Ugo-Ngadi to a minimum of 10 years imprisonment for the six– count charge proffered against them by the Economic and Financial Crimes Commission (EFCC).

“For each of the counts of conspiracy to obtain money by false pretences, the defendants are sentenced to 10 years in prison.

“For each of the counts of obtaining money by false pretences, the defendants are sentenced 10 years in prison.

The judge noted that the total sentences passed were 69 years for each of the defendants, but that the sentences would run concurrently.

“The N754 million which was defrauded by the company should be returned to the Federal Government.”

After the sentence was pronounced, counsel to Ugo-Ngadi, Mr Y.A. Kadiri, made an attempt to complain to Justice Okunnu about the treatment given his client by the EFCC.

“For the record, the conduct of the prosecution has been unethical.

“The second defendant has been in hospital though her situation had improved slightly, the prosecution mounted tremendous pressure on the hospital management to discharge her,” he said.

Okunnu, however, refused to listen to the complaint of the defence.

“I am now `functus officio’, if you have any complaint of ethical conduct, go to the appropriate authorities,” she ruled.

Ugo-Ngadi, who was on a wheelchair while the sentence was read, remained stoic and expressionless.

She had earlier on Jan. 13 slumped in the dock when the sentence was about to be passed by Okunnu and was rushed to the Intensive Care Unit of the Lagos University Teaching Hospital (LUTH).

Her family and well-wishers had escorted her to the court from the hospital.

As soon as the court rose, a white Kirikiri Female Prison van drove into the court’s premises and immediately conveyed her to the facility to serve her term.