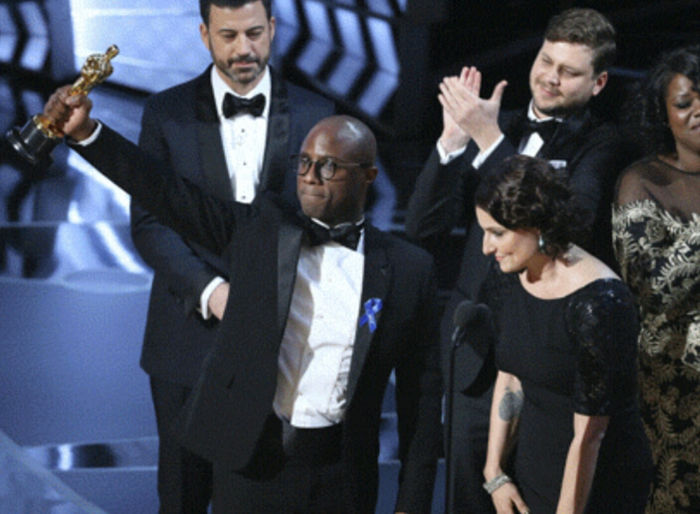 In a mishap that caused uproar and confusion, presenters Warren Beatty and Faye Dunaway initially announced that the romantic musical “La La Land” had won.

As the casts of both films stood awkwardly on stage, Beatty explained he had been given the wrong envelope to open.

“I want to tell you what happened. I opened the envelope and it said, “Emma Stone, ‘La La Land.’”

“That’s why I took such a long look at Faye and at you. I wasn’t trying to be funny,” Beatty said, breaking into tense laughter. It was Dunaway who ultimately said “La La Land.”

“It is true. It’s not fake,” said “Moonlight” director Barry Jenkins. “My love to ‘La La Land,’ my love to everybody.”

It was the first time in living memory that such a major mistake had been made at the Academy Awards, Hollywood’s biggest night

“Is that the craziest Oscar moment of all time?” Stone, who won the best actress Oscar for her “La La Land” role as a struggling actress, told reporters backstage “It’s a very strange happening for Oscar history.”

“I think everyone is in a state of confusion… and so excited for “Moonlight’,” Stone added, saying it was “one of the best films of all tine.”

“La La Land” went into the Oscars with a leading 14 nominations and emerged with six, including for its score and theme song “City of Stars.”

“Manchester by the Sea” star Casey Affleck was named best actor “Man, I wish I had something better and more meaningful to say…I’m just dumbfounded that I’m included,” said Affleck, a first-time Oscar winner.

Affleck came through despite 2010 sexual harassment allegations that resurfaced during awards season. Affleck denied the allegations which were settled out of court.

Viola Davis and Mahershala Ali won their first Oscars for their supporting roles in African-American stories “Fences” and “Moonlight,” in stark contrast to the 2016 Academy Awards when no actors of color were even nominated.

“Moonlight,” about a young boy struggling with poverty and his sexuality, also won the best adapted screenplay statuette, while grief-driven independent drama “Manchester by the Sea” took home original screenplay.

U.S. President Donald Trump was the butt of numerous jokes, capping an awards season marked by fiery protests at his policies.

Kimmel fired off political zingers and even tweeted at the Republican president, getting no immediate response.

But for the most part speeches were mild or made general pleas for tolerance rather than directly attacking Trump.