Bellew stops Haye in 11th round 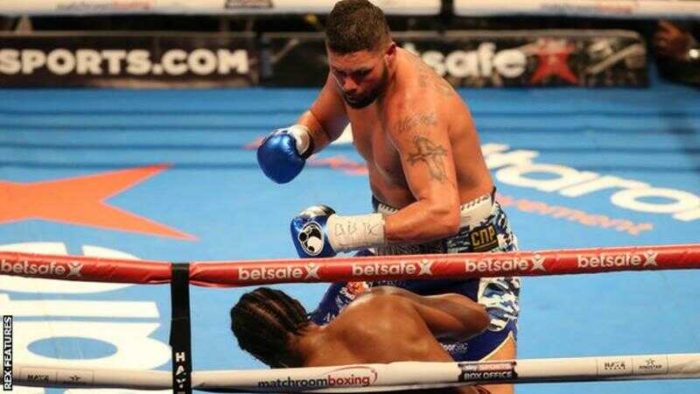 Bellew knocked Haye down in round 6

The Liverpudlian, 34, pounced when Haye suffered what turned out to be an Achilles injury in the sixth round to score a knockdown.

Haye, who had his right ankle strapped, carried on as bravely as he could for the rest of the fight, but was unable to move freely as Bellew seized the momentum.

And in the 11th, a second knockdown saw former heavyweight champion Haye tangled in the ropes, the towel enter from his corner and his hopes of a return to the world-title level of the sport left in tatters.

Bellew – a big underdog with bookmakers – raced to trainer Dave Coldwell in celebration as he scored a victory which will likely filter through to non-boxing fans far more than his 2016 world-title win at Goodison Park did.

And the bitter war of words leading up to the fight ended with Bellew helping a limping and exhausted Haye back to his corner.

The two embraced and the beaten, humbled Haye asked for a rematch during a lengthy post-fight interview before heading off to hospital to have surgery.

The first round had those in the O2 Arena intrigued. A hate-fuelled slug-fest or artistic boxing?

The latter won the day, with Bellew happy to see Haye jump in while he fired off solid replies in-between darting out of trouble.

And so established a pattern, Haye taking the centre of the ring, Bellew nearer the ropes.

As the established heavyweight stalked his man, often they stood statuesque for moments as Bellew looked for Haye’s trigger – his own prompt to counter.

But slipping shots can be a dangerous game and a straight right to Bellew’s jaw in the fifth was audible ringside, though nothing could be heard in the sixth as the Arena screamed at the drama.

Both men went down – Haye twice – though neither faced a count as their falls to the canvas were deemed slips but the sheer punch volume from Bellew then legally felled Haye, who looked stunned and shattered in answering a nine count.

Bellew, who stressed his rival would start tiring after four rounds, was then able to dominate, dictating the pace and notably throwing everything at Haye in the seventh in attempt to bring an end to proceedings.

Haye’s low blow in the ninth summed up his increasing desperation and, two rounds later, his brave resistance was ended moments after a barrage of punches sent him sprawling through the ropes.

Having clambered back into the ring, finally his camp threw in the towel, signalling the third defeat of a 31-fight career.

‘I’ve beaten one of the best’

Bellew, speaking to Radio 5 live: “He’s probably the hardest puncher in the world, and he’s so quick early on, he’s like a sprinter. He can really hit but he can also take a few himself.

“In my eyes I’ve beaten the best cruiserweight this country has ever produced and one of the best heavyweights. I am honoured to fight in the same ring as him. I’ve looked up to him.

“He made the same mistake everybody else does. He underestimated me. Watch me on tape and I’m terrible but in the ring I’m harder to hit than you think.”

David Haye, also speaking to Radio 5 live: “I’ve knocked out guys a lot bigger and stronger but he has the heart of a lion.

“I gave it my best and it wasn’t good enough. He was by far the better fighter tonight. He dug deep and took my best shots and put me down.

“I would love to do it again, I have never been in a fight like that. If the fans want to see it again I would do it again. We’ll do it on his terms, in his town – he deserves it.”

On his injury he said: “The ankle was just one of those things. The better man won on the night.

“It wasn’t my night. I didn’t land the good shots, I was in good shape but his game was better than mine.

“It felt like a Rocky movie and I was one punch away from knocking him out but I couldn’t quite do it.”

Haye’s graphic descriptions of his hopes of damaging Bellew in the run-up to the fight prompted concern from boxing authorities and undoubtedly turned some fans against him.

Eddie Hearn, Bellew’s promoter, believed anything other than an explosive knockout would be a “disaster” for Haye, who will now have to either retire or embark on rebuilding his in-ring reputation.

The 36-year-old will win plenty of plaudits for courageously battling on. But he was unable to land anything too meaningful prior to the critical sixth round.

With this latest injury added to the reconstructive shoulder injury he received in 2013, have we seen the last of a fighter who once unified the cruiserweight division, won a heavyweight world title and of course took Wladimir Klitschko 12 rounds in defeat?

A rematch with Bellew would be a money spinner, although many will call for retirement instead.