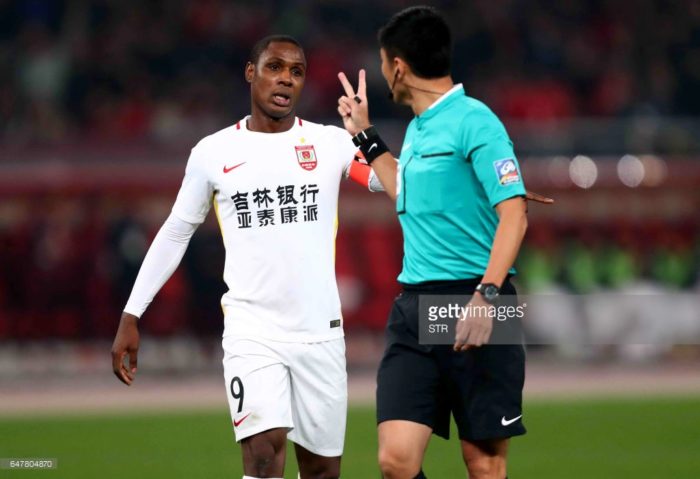 Following the kick off of its 2017 season last week, the Chinese Super League, CSL, is set for a bigger showdown this weekend, football lovers are promised the best of football by Nigerian top players featuring in eight matches.

The matches to be broadcast live by StarTimes will on Friday, 10 March, see Nigerian internationals, John Mikel Obi and Brown Ideye’s Tianjin Teda takes on Jiangsu Suning FC to start the weekend.

The match is a must win for the former Chelsea midfielder, who is both the club’s and country’s captain as his team lost 5-1 to Shanghai SIPG FC. While Obi has come out of the loss, he is determined to win this game and others in order to place the club at the top of the table.

The footballer, who now earns £140,000 a week playing in the League, has everything going smoothly for him. The weekly income does not include the various endorsements and sponsorships he gets.

On his part, Ideye, who was signed by Tianjin Teda to complete its squad for the new season, missed the first match of the club, but he is expected to also contribute his quota to the Friday game.

Following the uncertainties surrounding his career in West Brom, Ideye, who signed a €3.5 million deal with Tianjin Teda, is ready to prove his worth by tormenting the defense of Jiangsu Suning FC with his speed and skills.

Other Nigerian star expected to shine during this weekend fixture is Obafemi Martins. Martins, popularly called ‘Oba Goal’ who was the fifth highest paid player in US Major League Soccer for the 2013 season, with Seattle Sounders on an annual basic salary of $1.6million, is capable of pulling the wall of any formidable defense.

He is set to justify $6.6 million that Shanghai Shenhua FC paid to secure his service. The Nigerian striker is set to prove a threat to the defense of Tianjin Quanjian on Saturday, 11 March  with his speed, vision and skill.

At the peak of his game, Odion Jude Ighalo can be said to be Nigeria’s hottest footballer at the moment following his admirable feat in England before he joined Changchun Yatai in a deal worth £190,000 a week on 6 February. With the mouth watery deal, Ighalo is expected to wreck the defense of Guangzhou R&F on Sunday, 12 March.

Though, like Mikel, Ighalo also lost his debut match against Shanghai SIPG FC (5-1), the former Watford striker is determined to win the next game by all means for his team.

Meanwhile, former Nigerian international, John Etim Esin, has urged football pundits not to discourage Nigerian players seeking greener pastures in the Chinese Super League, saying that they are going there to secure their futures.

Esin said Nigerian players, who are already in the Chinese league, will make enough money that could sustain them throughout their retirement age, adding that China is the future of the round-leather game.

According to him, people should not see it as a clog in the wheel of football development in Nigeria, but should rather see it as means of moving with the trend.

“Yes, we have many Nigerian players in the Chinese league and thanks to number one international pay TV, StarTimes Nigeria for giving us the opportunity to view the matches from the comfort of our homes. They are there to secure their futures. There is no plan for retirement age in football, so I will not blame those players from moving to China,” Esin said.

He said no foreign league pay as much as the Chinese league, adding that the Chinese are super power economically and as such, have hired the best legs across the world to boost their league. Not only that, they have also attracted to their league some fine brains for the management of the game.