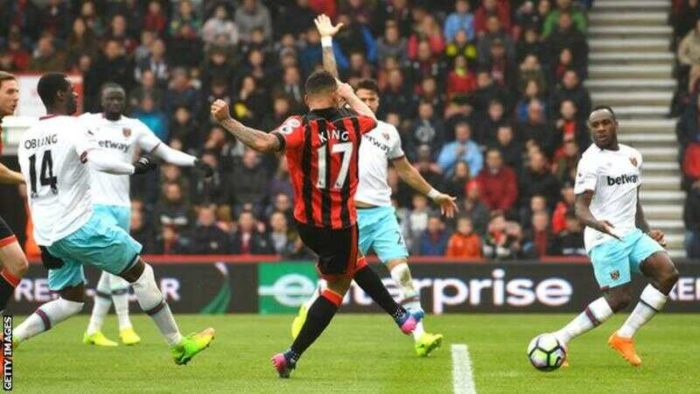 King scores one of his goals

Joshua King scored a hat-trick as Bournemouth boosted their Premier League survival hopes by beating West Ham to secure a first win in 2017.

King had missed an early penalty for the Cherries when he fired wide of the post, and 48 seconds later West Ham took the lead when Michail Antonio swept a low shot into the bottom corner.

According to the BBC, Bournemouth were given another chance from the spot after Marc Pugh was fouled but again failed to convert it as Benik Afobe’s effort was saved by Darren Randolph.

But the hosts did not let their heads drop and were level when King hooked the ball over his marker before volleying home. He then made it 2-1 with a close range finish just after the break.

Andre Ayew had looked to have earned West Ham a draw with a placed finished late on but King stole the points when he lashed into the roof of the net after Randolph had denied substitute Jack Wilshere.

Bournemouth were clearly aggrieved earlier this week when defender Tyrone Mings was handed a five-match suspension for violent conduct in the 1-1 draw with Manchester United last week.

Mings had appeared to stamp on Zlatan Ibrahimovic but Bournemouth defended their player fully in a strongly worded statement, while fans held banners in support of their player during the game against West Ham.