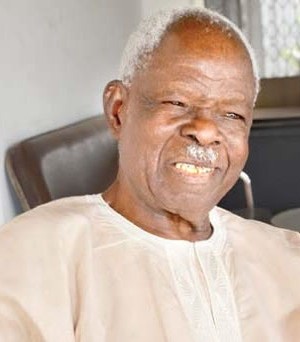 Governor Ayodele Fayose of Ekiti says that Governors of South West States will ensure that the late Maj.-Gen. Adeyinka Adebayo is given a state burial.

Fayose, who is also the Chairman of the Peoples Democratic Party (PDP) Governors’ Forum, stated this on Saturday when he paid a condolence visit to Adebayo`s family at his Lagos residence, Ikeja.

Fayose said he had sent a letter to his colleagues in the Southwest geo-political zone on the need to give the departed general, who hailed from Ekiti, a state burial.

“I have written letters to my colleagues governors. I don’t think his burial should be a business of the family in all understanding.

“However, the family will be the vehicle to guide all of us. I don’t know how many people were born when the general was the governor of the old Western region.

“This burial is an issue for South West Governors and other constituencies that Baba represented. I am very sure that when the committees are formed, we will be widely represented.

“With the permission of the family, we will communicate with my colleagues, they won’t be the one communicating to me, I am to communicate to them,” Fayose said.

According to him, arrangement will be done promptly and properly with minimum delay and in collaboration with the deceased`s family.

The Ekiti Governor, who said that Adebayo had so many sides, added that he was a great man who lived a very good life and represented his people.

He said that the entire south west zone would definitely miss the late Adebayo.

Responding, Mr Niyi Adebayo, the first Civilian Governor of Ekiti and son of the deceased, expressed gratitude to Fayose for the gesture.

“We are indeed very grateful that you have deemed it fit to come and pay us a condolence visit.

“In fairness, to you, whenever our father was in Ekiti, you always visited him and spent time with him, for that we are very grateful because it meant a lot to him.

“That is why I referred to you as ‘Omo baba’ (child of Adebayo), this is not politics; our father was more than politics because he was not partisan.

“He saw himself as a true Nigerian, he did not belong to any political party,’’ the deceased son said.

According to him, his father while alive supported the Federal Government and any government in Ekiti because he was interested in peace and the progress of the people.

He said his family was happy that the south west governors were prepared to give their late father a state burial, which they deemed to be his due.

He, however, said that some governors in the zone and dignitaries from across the country had earlier visited the family while others called on phone to condole them.

Also speaking during the visit, Gov. Godwin Obaseki of Edo, described the late Adebayo as a straightforward, upright and disciplined gentleman.

Adebayo died on March 8, the eve of his 89th birthday.

The late general served as the Military Governor of the then Western region comprising Oyo, Osun, Ogun, Ekiti, Ondo and some parts of Lagos State between 1966 and 1971.