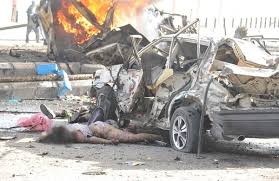 The death toll from a double bomb attack targeting Shiites visiting a pilgrimage site in Damascus has climbed to 74, the Syrian Observatory for Human Rights reported on Sunday.

Most of the dead in Saturday’s attack were Iraqi Shiites going to visit a cemetery near the Old City of Damascus.

There has been no claim of responsibility.

The Hezbollah-run al-Manar TV station said it was carried out by two suicide bombers.

Syrian President Bashar al-Assad has been supported in the country’s war by Shiite militias from countries including Iraq, Afghanistan and Lebanon.