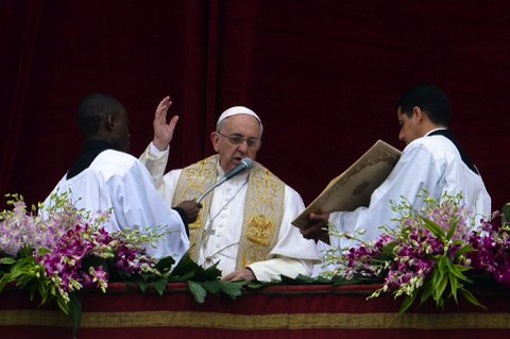 The U.S. has congratulated His Holiness Pope Francis ahead of the fourth anniversary of his election, on Monday, March 13, 2017.

The U.S. Secretary of State, Rex Tillerson, in a congratulatory message, commended the cordial relationship between the U.S. and the Holy City to ensure a better world for humanity.

“On behalf of President Donald Trump and the people of the United States, I offer my congratulations to His Holiness Pope Francis on the fourth anniversary of his election as Bishop of Rome and leader of the Catholic Church.

“The United States and the Holy See have worked together for decades to face global challenges such as trafficking in persons, food insecurity, epidemics, and the exploitation of religion as a tool to incite hatred and divide nations.

“Together we have built vital partnerships and cooperated to advance peace, liberty, and human dignity around the world.

“On this day I join millions of Americans, and people around the world, in congratulating the Holy Father and wishing him continued success in leading the Catholic Church to make a better world for all,” Tillerson said.

Born as Jorge Mario Bergoglio on Dec. 17, 1936, Pope Francis is the 266th Pope of the Roman Catholic Church, a title he holds ex officio as Bishop of Rome, and sovereign of Vatican City.

He chose Francis as his papal name in honour of Saint Francis of Assisi, the first Jesuit Pope from the Americas, the Southern Hemisphere and outside Europe since the Syrian Gregory III, who reigned in the eighth century.

Following the resignation of Pope Benedict XVI on Feb. 28, 2013, a papal conclave elected Bergoglio as his successor on March 13.

Throughout his public life, Pope Francis has been noted for his humility, emphasis on God’s mercy, concern for the poor, populist causes and commitment to interfaith dialogue.

He is credited with having a less formal approach to the papacy than his predecessors, for instance choosing to reside in the Domus Sanctae Marthae guesthouse rather than in the papal apartments of the Apostolic Palace used by his predecessors.

He maintains that the church should be more open and welcoming.

He does not support unbridled capitalism, Marxism, or Marxist versions of liberation theology.

Pope Francis maintains the traditional views of the church regarding abortion, euthanasia, contraception, homosexuality, ordination of women, and priestly celibacy.

He opposes consumerism, irresponsible development, and supports taking action on climate change, a focus of his papacy with the promulgation of ‘Laudato si’.

In international diplomacy, he helped to restore full diplomatic relations between the U.S. and Cuba.